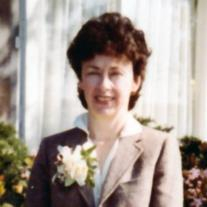 Anne Marie Machado, 75, of Laguna Niguel, California beloved wife, mother, and grandmother, died on November 25, 2015. Anne Marie died at home after a long term illness. She was born on February 16, 1940 to Mary Nocero and William Felter.

Anne grew up in Valley Cottage, NY where she attended Nyack High School and went to Ladycliff College where she majored in French. After college, she began teaching French to middle school students. After being married and raising her three children, she went on to UCLA and Long Beach State University where she earned advanced degrees in Interior Design and a Teaching certificate in English as a Second Language. She worked in the Palos Verdes School System for many years teaching English to foreign students and also tutored children in her own home. Anne had a great love of cooking, reading and enjoyed travelling with her husband and family to Hawaii, Lake Tahoe, and to upstate New York where her family grew up.