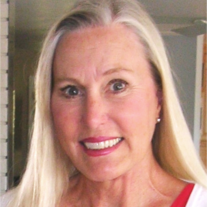 Ann Wilkinson Stipher, 69, passed away at 7:00am, on Monday August 29 after a long battle with cancer.

Ann was born in LaPorte, IN on June 23, 1947 to Jeanne and Ken Wilkinson. She was raised in South Bend, IN with her five siblings. Ann attended Ball State University and then became a flight attendant for TWA.

Ann and Steve Stipher were married on April 8, 1972 in Indiana. They resided in Phoenix, AZ and Danville, CA before settling to raise their family in Mission Viejo, CA where they have lived for the past 30 years.

There was nothing Ann loved more than her family. She was a devoted, loving and loyal wife, mother and grandmother. She and Steve were best friends and spent 44 years together living life side by side. After growing up in a large family and taking care of her younger siblings, Ann knew she wanted to be a mother. Raising Jason, Amy and Ryan was her greatest joy and motherhood suited her perfectly. As much as she loved being a mom, being a grandmother was her ultimate delight. She spent countless hours with each of her four grandchildren, spoiling them with the gift of unconditional love. She was active and fun, always taking them on adventures to the park, pool or the lake. She enjoyed having them spend the night, going to the movies and treating them to ice cream. She was an important and special part of their lives.

Ann also loved her home. Whether she was doing a woodworking project, planting in her garden or cooking a meal for her loved ones, she was as creative and handy as they come.

Surviving along with her husband Steve are her three children: Jason (Beth) Stipher of Laguna Niguel, CA Amy (Dave) Loros of Costa Mesa, CA and Ryan (Rae) Stipher of Anchorage, AK. She is also survived by four grandchildren who were the light of her life: Luka (8), Lilly (7), Finley (5) and Olivia (3).

A funeral mass will be held at St. Killian’s Church in Mission Viejo, CA on Tuesday, September 27, at 12:00 PM.

In lieu of flowers the family has requested that donations be made to City of Hope. City of Hope is a world leader in the research and treatment of cancer. To honor Ann’s memory please visit this link http://cityofhope.org/cardsforhope or call 866-693-HOPE (4673).