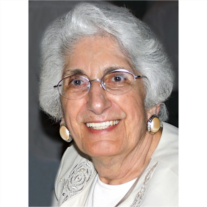 Alice Martin, daughter of Hachig and Emastouhi (Chakarian) Samuelian was born March 22, 1925, in South Boston, Massachusetts. As a teenager Alice moved with her family to Southern California. She worked at Continental Can Company and during the war became one of the original “Rosie the Riveters.” She also worked at Allstate Insurance Company and worked her way up to “Claims Adjuster.”

Alice married Al Martin on July 21, 1945 in Monterey Park, California. They raised their two daughters in Pico Rivera. In 1958, the family moved to Aberdeen, South Dakota where Alice worked in retail sales. Alice and Al returned to Southern California in 1978, settling in the Coachella Valley until 2004, when they moved to Laguna Niguel.

Faith and Family were important in Alice’s life. She was active in various church activities for many years. Alice loved sharing her life with her husband of 62 years, her daughters, Gerry Martin, Barbara Fisher, and her son-in-law Steven Fisher. She loved her friends and extended family, but mostly, Alice loved being a wife, mother, sister, and especially being “Auntie Alice.”