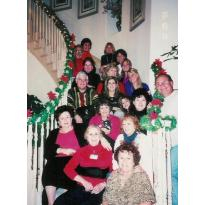 Alice J. Yost passed away at Saddleback Memorial Medical Center as a result of complications following a broken hip. She was 86 years of age. Her passing was peaceful and she suffered no pain.

She was born in Highland Park, Michigan to immigrant parents, Harry & Betty Fesjian, who had escaped the 1915 Armenian genocide. She moved with her family to Los Angeles, California in 1938. She graduated from Manual Arts High School and made a career as a stenographer and secretary with Billy The Kid Sportswear and later as an Administrative Assistant with Hughes Aircraft.

After retiring in 1988, she spent time with her family and as a member of The Orange County Ararat Guild, The Red Hat Society, and playing cards with her friends at the Norman P. Murray Senior Center in Mission Viejo, CA. She was known to be very gregarious and always made the most of social interactions with everybody and anybody. She is survived by her brother, Karnig and his wife Tina; her son, Charles and his wife Debra; her grandson, Jeremy; nieces, Anita, Lorraine and Pippa, and nephews, Haig, Warren and Armen.