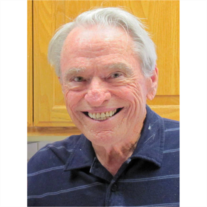 Whether you called him Alfred, AI or Mac, he would always respond with that wonderful smile. Born a southern gentleman in Memphis, Tennessee, he attended Memphis State and later earned a law degree. He was a devoted husband to Caroline, his wife of 55 years. After their marriage, Alfred served in the U.S. Army and raised three children.

His 35 plus year career with Firestone kept the family moving throughout the South and up to Ohio as he ascended the corporate ladder until retirement. The family finally settled down in Southern California in 1975.

Alfred and Caroline retired to Big Bear in 1990. He remained active by having their dream home built, being a parishioner at St. Joseph’s Catholic Church, spending some 16 years on Big Bear Lake with the U.S. Coast Guard Auxiliary and being a member of the Moose Lodge. Winters meant driving the motor home to Guadalajara where months were spent each year with his grandchildren. He continued to remain active after the passing of his wife, Caroline, in 2007.

In lieu of flowers, donations may be made to St. Jude’s Hospital in Memphis. Services will be held on Friday, May 13, 2016. A Catholic Mass will be held at 10 a.m. at St. Thomas the Apostle Church, 9136 Magnolia Avenue, Riverside, California, followed by a reception. Burial ceremonies will begin at 1:30 p.m. at Riverside Veterans’ Cemetery.