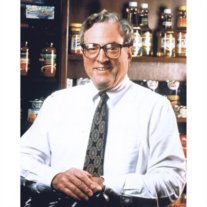 Albert J. Crosson died in his home in Newport Beach September 26th from complications related to cancer; he was age 83. Born in Minneapolis, Minnesota, Al made his home in Fullerton for over 36 years before moving to Newport Beach in 1996.

Al came to Fullerton in the late 1950’s when he joined the Hunt Foods Company. He would ultimately spend over 30 years spread across two tours of duty with the company, which evolved into Hunt-Wesson Foods and then ultimately the ConAgra Grocery Products Company. Over the years Al grew within the organization to become its President for over ten years. After his retirement, for the next five years, Al served as Vice Chairman of the Board for International Game Technology.

For over 48 years Al was very active in charitable causes throughout Orange County including Big Brothers Big Sisters of Orange County and St. Jude Medical Center in Fullerton. At St. Jude his financial support led to the establishment of the Virginia K. Crosson Cancer Center, which was named in honor of his late wife who pre-deceased him in 1991 after her own bout with cancer.

A Memorial Mass for Al will be held at Our Lady Queen of Angeles Church in Newport Beach on Monday, September 30th at 3:30pm. In lieu of flowers, the family requests charitable donations be directed to the Albert J. Crosson Memorial Fund at Big Brothers Big Sisters of Orange County (www.bigbrooc.org or 714-619-7048). Additional funeral information can be found by contacting O’Connor Mortuary at (877) 872-2736.