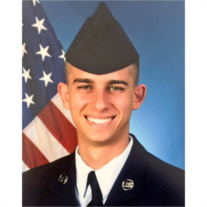 Christopher Kyrillos Gillebaard wanted to become an aviator – just like his grandfather.

The 19-year-old graduate of Aliso Niguel High School had heard stories through his boyhood about his grandfather, Hank Gillebaard – life twists and turns that had inspired a 2015 biography, “Private Lucky: One Man’s Unconventional Journey from the Horrors of Nazi Occupation to the Fulfillment of a High-Flying American Dream.”

But Christopher Gillebaard’s pursuit was cut short. The grandson, known to friends as “C.K.,” died on Thursday, Sept. 21, in Missouri of suspected heart failure, the family said.

His body was flown home to LAX on Tuesday afternoon.

C.K. had enlisted in the Air Force in November and was settling in at Whiteman Air Force Base, intent on earning a private pilot’s license at a school nearby. He hoped after completing his four-year enlistment to stay on and train as an Air Force pilot or become a commercial pilot, his family said. He was inspired by his grandfather’s flying stories and watching him perform aerobatics.

“For his 16th birthday, his mother got him airplane lessons,” said his father, Ted Gillebaard. “She has pictures of him flying.”

C.K.’s mother, Fadia, his sister, Verinia, and his brother, Joshua, are among survivors.

Services are set for noon Thursday, Sept. 28, at Saint Marina Coptic Orthodox Church in Irvine. A 21-gun salute is scheduled to follow, at around 2 p.m., at Ascension Cemetery in Lake Forest.

Christopher Gillebaard was preceded in death by the grandfather who inspired his aviation aspirations. Hank Gillebaard, 90, died March 31 at the San Clemente home he shared with wife, Lola, who found a measure of solace in C.K.’s passing.

“I hope,” Lola said, “that he and Hank have found each other.”