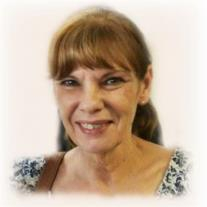 Adele Ann Adams (Andrews), beloved mother and grandmother, passed away peacefully on August 8, 2015, surrounded by her loving family. Adele fought a long and courageous battle against lung cancer. She was 62. “Del” was born June 21, 1953 in Waterbury, Connecticut and moved to Dana Point, California in 1979. She is survived by her daughter Shanon Ohmann and her granddaughter Noelle Ohmann of Ladera Ranch, California.

Adele was the owner of “Life of the Party” a very successful party planner business. Adele was a very devoted mother and grandmother. Her greatest pleasure was spending time with her granddaughter, Noelle. She also enjoyed her Starbucks coffee with her friends, trips to the casino and walking on the beach.

Shanon and Noelle would like to thank all family members, devoted friends and healthcare providers for their loving support through this difficult time.

A “Celebration of Life” will be held at the O’Connor Mortuary, 25301 Alicia Pkwy, Laguna Hills, California 92653, on Saturday August 15, 2015 at 1:00 p.m. A private family burial will be held at El Toro Memorial Park, Lake Forest, California at a later date.

“In God I move and breathe and have my being.”