“Never Ever Give Up”: The Jessie Rees Story 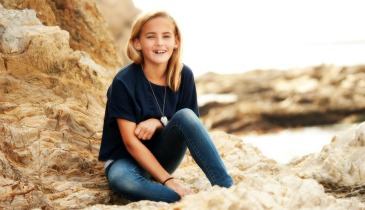 “Never Ever Give Up”

Jessica Joy Rees received this heartbreaking diagnosis in March of 2011. I met Jessie’s “daddy”, Erik Rees, through my service in the Memorial Ministry at Saddleback Church where he is a pastor. I listened to Pastor Rees speak and comfort families during the most difficult times of their lives. Never did I imagine such a reversal of roles.

News of Jessie’s condition took a long time to adversely affect me. Our church has prayed through cancer and brain tumors before. This would be another opportunity to praise God’s healing or so I thought. I followed Jessie’s journal on Facebook. I thanked God on the days she reported the MRI’s had shown some improvement. My heart ached for her and her family when her reports did not sound encouraging. Even when Jessie was having bad days her bright spirit leaped off the pages of her journal. Jessie lost her battle with this dreadful disease on January 5, 2012.

Jessie did not let what was going on inside of her body affect her outlook on life. She proved that she was given the middle name of Joy for a reason. Even while she was being poked and prodded she was thinking of others. Her main concern was finding a way to spread hope, joy and love to other children battling pediatric cancer.

And so, Joy Jars were born. Jessie wanted to fill jars with toys and activities that would bring children battling cancer joy. While she was well enough to do so, Jessie stuffed and delivered Joy Jars to children in the hospital.

Jessie’s innocent gesture has grown into the Jessie Rees Foundation – Team NEGU. NEGU is Jessie’s motto of “Never Ever Give Up”. Due to the generous support of sponsors such as Build-A-Bear, Chick-fil-A, UPS, Marriott and Veggie Tales, Joy Jars have reached 115 Children’s hospitals and 175 Ronald McDonald Houses.

Although I never met Jessie personally, I can’t help but feel that I knew her through her journal. Her “daddy” Erik has continued this journal.  Jessie’s family  invited us into their lives to pray for their daughter and now allow us to grieve the loss of Jessie along with them.

Jessie continues to inspire me on a daily basis. I was fortunate to be in attendance for her Celebration of Life Service. The Worship Center of Saddleback Church was filled to capacity and there was overflow into multiple other venues.

I consider Jessie to be an inspiration for the following reasons;

Her trust in God – This is a time when even the strongest of faiths may be tested. She loved God and trusted him with her illness. I find this amazing for an eleven-year old child.

Her concern for others – I can’t think of a better time for a child to be justified in being selfish. This was not the way God made Jessie. She wanted other children to experience hope, love and joy.

Her continuing legacy – The Jessie Rees Foundation continues to grow by leaps and bounds. Jessie’s dream was for every child battling cancer to have a Joy Jar. Through continuing sponsorships and donations her dream is rapidly coming to fruition.

Jessie’s much too short life was not in vain. God had a plan for her. Without her, children around our nation would not be receiving a dose of joy in the hospital.  I believe this helps them to feel less alone during a scary time.

How has cancer affected your life?

Have you known someone like Jessie who focused on others during their health battle?