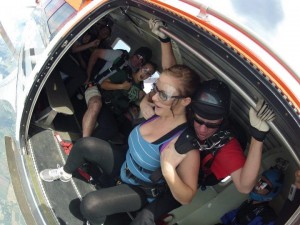 I’m dangling out of an airplane 2.7 miles in the air, and I’ve got “Dave the Dark Side” strapped to my back.

He tells me that he’s going to count to three, and we’re jumping.

There’s no looking back now.

1….2…. and before we even get to 3, I’m spinning, flipping and soaring through the air at a mere 120 miles per hour. It’s almost like riding the wild winds of a tornado.

There’s no feeling in this world that comes close to jumping out of a plane. Especially when you’re terrified of heights.

Skydiving, for me, was not just some thrill-seeking activity. I had been experiencing a “lull” in my life… a bad case of the 9-5 syndrome.

I was so caught up in life, I forgot to live.

You know that feeling, right?

It was about time I did something to challenge myself. So, I decided to do something that would scare the life out of me, and then hopefully bring it back in a burst. I went skydiving! 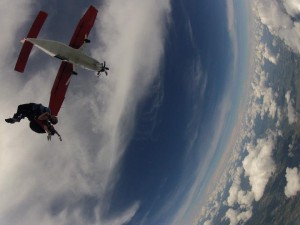 While up in the air, here’s a few valuable life lessons I learned:

What makes you uncomfortable? I’m not talking about an old, lumpy bed or tight leather pants. Maybe speaking in front of a group of strangers, or singing karaoke makes you feel out of place. But when you finally challenge yourself, you’re forced to reach deep from within to accomplish it. The result is often life-changing.

Challenging myself to skydive was so much more satisfying than achieving a normal, everyday predictable task. In fact, it inspired me to want to start doing more things I would never dream of doing. It’s funny how a 5 minute activity can change the rest of your life, isn’t it?

My top 3 fears are creepy crawly creatures, the dark and heights. Which is why when I told my friends I was going, they wondered how I was ever going to jump out of an airplane when I have a hard time actually getting in the plane in the first place.

That’s the funny thing about fear… when I was cold and terrified with my cheeks flapping in the wind, I felt an overwhelming sense of accomplishment. For once in my life, I didn’t let my fear stop me from doing something. I more than overcame my fears… I had a blast doing it. Heights? They don’t scare me anymore.

After my skydiving adventure, every person I talked to said something along the lines of “Wow, I wish I could do that.” My response? You can. It’s much easier to say you’re going to do something, than it is to actually do it. A lot of times, talking about it too much gets in your way.

Why not just do it now? Start by writing a bucket list – I did. I put together a list of 10 things I wanted to absolutely do this summer. And guess what… I can add a “check” next to all of them.

This one is hard because I’ve seen some pretty beautiful sunsets and eaten fantastic food that brought me pure bliss. However, 99.9% of the time, my happiness isn’t based on possessions or things… it’s based on moments.

How many times can you say you’ve jumped out of an airplane? How many times have you laughed until you snorted milk out of your nose? Those moments are rare, but we always remember them, don’t we? Instead of saving up the little money I had to spend on an expensive TV or a designer watch, I saved up to go skydiving and even visited Europe this summer. I have more memories, moments, and laughs stored in my memory from those two adventures than any designer watch or television could bring me.