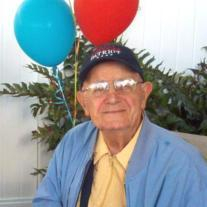 He was born August 30, 1920, in the Bronx New York, son of the late Angelina and Donato Farfone. He was the youngest of 5 siblings. On April 28, 1946, he married the love of his life Rita Locilenti, who survives.

He graduated Pleasantville High School in 1939. He enlisted in the Army Air Force in Fort Dix, NJ in 1942 where he specialized as an airplane and engine mechanic. During his service in WWII he earned the distinguished unit badge with one “Oak Leaf Cluster”. In February of 1944 he earned a European African Middle-Eastern Service Medal and Good Conduct Medal. He served with the 344th bomb squadron-98th bomb group. Following his service he attended Pace College in New York City. He lived in New York for a majority of his life and was employed by Dollar Savings Bank of New York for 35 years, retiring in 1983. In 1987 he retired to Dana Point California with his wife, Rita. He was a member of the VFW and actively participated in organization activities and was a parishioner at St. Edwards in Dana Point California.

He was preceded in death by his son, Daniel and is survived by his children, Vincent, Jane and Carol, 5 grandchildren and 7 great-grandchildren.

He was a wonderful, kind and compassionate man who loved his family, touched many lives and had a great sense of humor. He loved God, his family and life and he will be greatly missed.