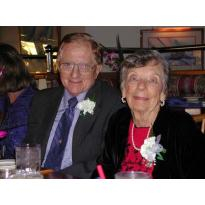 Paul was born on November 28, 1912 in New Ulm, MN. His grandparents and family came from Germany in the late 1890’s. They were proud to be Americans and learned the English language without the aid of many schools available to immigrants. In 1916 his family purchased and moved to a farm three miles from Elgin, ND. Paul had all kinds of experiences on the farm. He milked cows, picked mustard/weed, fed and herded the cattle, cleaned the barn, hauled hay, drove a team of horses for the header which cuts grain, and worked on a threshing crew. In the early 30’s, Paul worked for the WPA Work Progress Administration. He drove a single box wagon with a team of horses. Paul loaded gravel by shovel into the box.
Paul bought wood working tools. He learned woodworking from his Dad. Paul remembered making a wagon, a threshing machine, and a tractor that won 1st place in the County Fair. Paul traded the tractor for a bike. He graduated from Elgin High School in 1932. While in High School, he was the Basketball Captain. As a football player, he was called the ‘running rabbit’ because they had a hard time catching him. He joined the Civilian Conservation Corps CCC’s for a year. While there, he worked in the dental office, which inspired him to enter the dental program at the University of North Dakota, Grand Forks. He didn’t have the money to transfer to the University of Minnesota. It all turned out for the best as he went to work for Farm Security Administration & Production Credit Association in McClusky, ND, where he met his wife Olga. The threats of W.W. II were looming and having a federal job, Farm Security cut back and Paul went to Hopkins, MN, where Paul had a sister & brother-in-law.
Paul & Olga were married October 28, 1940 and lived in Hopkins, MN. After about 2 years, Paul and Olga bought a new home in St. Louis Park. Their daughters, Paulette and Kathleen were born during this time. Paul worked at the Minneapolis Moline. He was an inspector of machinery and outriggers for anti-aircraft guns. He was then promoted to the production control office. Paul joined his brother-in-law who started Allied Industries where they manufactured the first emery boards and imprinted on them. In June of 1950, Paul sold his interests and became interested in Rural Electrification Administration. Paul & Olga’s next 29 years were in Velva and Minot, ND. Olga was Paul’s first employee when he incorporated Souris River Telephone SRT in 1953. This required the purchase of many telephone companies. Throughout the years this required meetings at the Pentagon, Federal Communications Commission of Canada, NW Bell, and meetings at many military bases throughout the US. Paul even had the honor of meeting J.F. Kennedy.

What wonderful vacations the whole family enjoyed throughout their years while in Minot. They made many visits to Norfolk, VA where Olga’s sister Margaret and family lived. When Margaret’s family moved to San Diego, we continued having many beautiful times together on the west coast throughout the years.

Paul retired in 1979 and Paul & Olga moved to Mission Viejo Casta del Sol, CA. Paulette & Gregg and sister-in-law Lorraine already lived in Orange County and Kathy, Bruce & family followed in the next year. Paul enjoyed his special interests during retirement. His first love was being with all his family. Of course, his favorite sport was golfing with Olga, and Lorraine & Don. Paul even achieved a Hole-In-One at the Casta del Sol Golf Course in ’88. The whole family loved being entertained by Paul’s mouth organ playing, including his great grandson Lucas. Paul also loved taking care of his flowers, doing woodworking and being active in his church. Paul and Olga were members of Abiding Savior Lutheran Church for 29 years in Lake Forest, CA. Paul never forgot Abiding Savior and Pastor Tom. Paul was always a very willing usher and greeter and helped with the financial duties. Milestones reached in 2008 were Olga’s 90th birthday, Paul & Olga’s 68th anniversary and Paul’s 96th birthday which were all celebrated with their family.