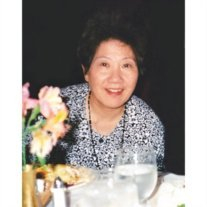 Born into an affluent merchant family she would see that fortune lost and the family dispersed, escaping not only the revolutionary conflicts in China, but also pirates patrolling the surrounding waters. She landed in Taiwan and graduated from the top Taipei Number One Girls High School followed by the National Taiwan University in 1955 with a Degree in English.

Taiwan at that time would be too small a country for her ambitions and energy. She willed her way to the United States in 1956 attending Duquesne University in Pittsburgh, Pennsylvania where she studied accounting. Always social, she came together with a group of fellow overseas Chinese and immediately caught the attention of a studious and quiet yet humorous recent Carnegie Mellon PhD graduate. Opposites attract or perhaps the mutual love of laughter and she gave up her studies to marry Russell YT Chou, from Yangzhou, China, in 1958; the love of her life, they would remain forever together since.

After a year, their daughter Vivian Chou Wilson (Eric) of Chatham, NJ was born followed by a son Kenneth Y Chou (Jing) of Hong Kong, PRC. She quickly took to motherhood raising her children and, having not known how to boil an egg, becoming the best-loved cook of family and friends. They left Pittsburgh in 1968 for Bethlehem PA where Russell became a professor at Lehigh University. Her love of family was further rewarded as her beloved mother, two older sisters and younger brother also found their way to America. Hedy was the matriarch of her family and was connecting not only with the lives of her children but being young at heart also her grandchildren, nephews and nieces.

After seeing her children safely enter universities, she found her own career at the library at Lehigh University in 1985. Hedy had an energetic, vibrant personality, and loved to meet people and make new friends; friends and neighbors expanded and she quickly adopted a new ‘work’ family engaging them in her favorite pastimes of friendly debate and finding the brighter and humorous side of life.

She retired from Lehigh after ten years and spent years in the Bay Area and Hsinchu, Taiwan before settling in Irvine in 1997 where she continued lead an active social life, starting a coffee club with her fellow workout friends who immediately took to her skills honed at Lehigh and adding to Hedy’s many families.

She is survived by her husband and children, a brother Hsun K of Los Altos Hills and sister Marian of Menlo Park, and her five grandchildren; Brian and Kevin Wilson of Chatham, NJ and Kelly, Kaitlen and Khloe Chou of Hong Kong, PRC.

She will be greatly missed, but we will think of her daily, and continue to lead our lives in the way she would have wished.

A celebration of Hedy’s life will be held on Wednesday, October 23, 2013 at 1:00pm at The O’Connor Funeral Home in Laguna Hills and will continue at the Asia Buffet, 23552 El Toro Rd., Lake Forest, CA 92630. In lieu of flowers the family suggests you continue Hedy’s love of jokes and laughter with memorial contributions to Patch Adams Teaching Center and Clinic’s Gesundheit Institute at www.patchadams.org.