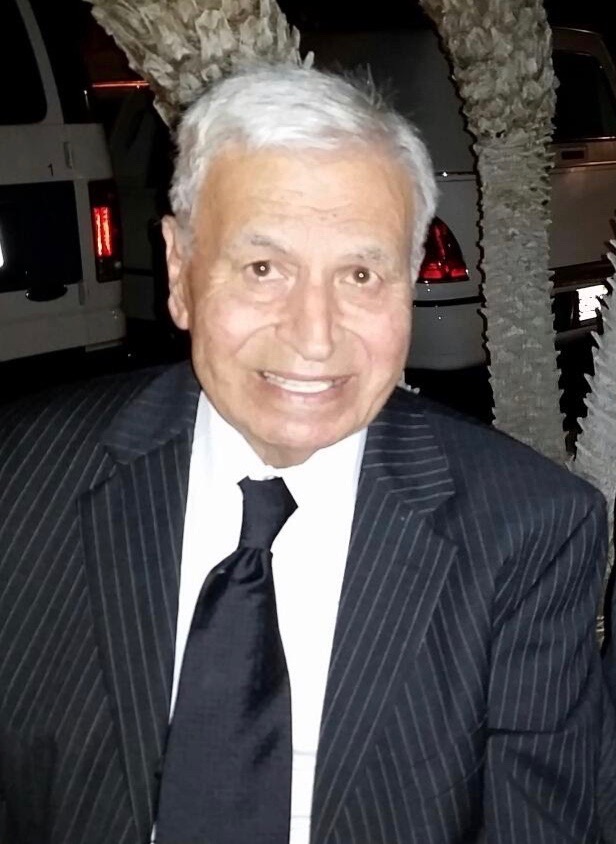 It is with great sadness that we inform you of the peaceful passing of Yacoub Aftim Saba, on July 24, 2020 in Laguna Hills, CA due to Alzheimer’s.

Yacoub was born in Lydda, Palestine on February 17, 1928 to Aftim Qustandi Saba and Nayfeh Elqura Saba, and was one of 11 surviving children.  Yacoub, an Orthodox Christian, loved his church, extended family and Palestine. He was a successful businessman, a passionate reader, very well informed in politics, especially related to his homeland of Palestine and played a mean game of backgammon.  He was very well respected in his community, as a devoted son, brother, loving husband, father, grandfather, uncle and friend.

Yacoub lived in Lydda, Palestine until May 1948 when he, his parents, and siblings were forced out of their home during the Palestinian Catastrophe (Al Nakba), becoming instant refugees.  This was a time when many Palestinians experienced forced expulsion from their homeland.  It was Yacoub’s quick thinking to hide a small amount of cash in a pillowcase that helped his family survive the long and strenuous journey mostly on foot, and ultimately restarting their lives in Gaza after several months.  With a business degree and an eagerness to work, in 1953 he left Gaza and joined his older brother, Amin in Benghazi, Libya, where he was hired to work as a business manager by a member of the Libyan Royal family, and later in 1965 started his own successful construction company.  During this time, he met and married the love of his life, Genevieve (Jenny) Ajlouni in Ramallah, Palestine on August 30, 1959.

Yacoub and Jenny were married for 55 years, experiencing many adventures, and traveling the world. They raised 5 children together, building a life and a family based on love, support, respect, and their faith in God. In 1978, due to political uncertainty in Libya, Yacoub and his family immigrated to the U.S, settling in Laguna Hill, CA.  In doing so, he lost his successful business in Libya to the government.   Yacoub once again had to start over financially in the U.S. With the help of his hardworking wife, Jenny and their sons, he found success again in owning convenient markets, real estate and later a motorcycle dealership.  With all the challenges Yacoub had endured and sacrificed over the years, and with moving to a new country, he never once complained.  The well-being and safety of his family was always his main focus.

Yacoub was also a proud grandfather to 17 grandchildren! Yacoub shared his many life experiences with his children and grandchildren and instilled a strong work ethic, a love for family, devotion to Palestine, importance of continuous reading and learning, and his love for travelling.  Although he was a man of few words, he loved giving his family and friends advice, and when he spoke it was powerful, significant, and meaningful. He taught his family to not take anything for granted, to always remain honorable and humble.

Yacoub lost his beloved Jenny in 2014 leaving a strong void in his heart, and he would never be the same after.  He is survived by his children and their families, Iman and Nabih Najd, Ghassan and Helen Saba, Maher and Rima Saba, Rima and Fouad Tarazi and Marwan and Hanan Saba; his beautiful grandchildren; his siblings Amin Saba, Asal Ayad, Elain Saba, Farah and Sylvia Saba, Nasr Saba, and Samira Saba; and many nieces and nephews.

He will be deeply missed by his family, friends and all who knew him. May his memory be eternal.

Funeral will only be for immediate family due to the COVID-19 safety requirements.  Thank you for your understanding and continued support.