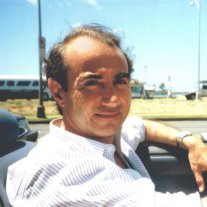 Xenofon Georgios Papadopoulos began life on April 17th, 1942 in Karpathos, Greece. Xen was born to Giorgos & Anastacia Papadopoulos on a sparsely populated island in the Agean sea called Karpathos. He was the second of 4 children: Sophia, Poppy & Niko. During that time life was not easy. It was World War II and there was very little food on the island. One day Xen’s father, Georgios, was walking back from a cove called “Kyra Panagia” to his home in the bay called “Pygathia.” Along the way, his path joined that of another man known on the island as Karaminas. They walked along the tree-lined hilly dirt road, and had plenty of time to talk and got to know each other better. Georgios talked about his family and how they came to live at Pygathia. Karaminas had a bag of freshly baked bread and took out a loaf and gave it to Georgios telling him to give it to his family. But Georgios, being proud, refused the bread. Karaminas insisted strongly, “If you believe in God, you must take this.” Georgios had grown up Greek Orthodox, and had heard the townsfolk say that Karaminas was atheist because he no longer was Greek Orthodox, so George replied, “But you yourself don’t believe in God, so why do you say this?” To which Karaminas answered, “I do indeed believe in God,” and he took out the bible that he always carried with him and began witnessing to George.

George studied and eventually he and his family became Jehovah’s Witnesses. The locals on the island labeled them heretics and broke open the door to their home and arrested George. There was a storybook on the table and they waved it at Xen telling him THIS is the book young boys should be reading. Xen took it and ripped it in from of them. Soon thereafter, during a wave of the flu, the schools on Karpathos closed for 2 weeks and George took the opportunity to take his family to Rodos. Xen was 13 years old.

Rodos was a bigger island with a larger population and there were no small-town politics. Xen studied there until age 17 when he received a certificate in drafting. At this age he was about to be held for the military draft. Being one of Jehovah’s Witnesses, he was opposed to serving in the military and for this reason he left Greece. In 1958 he went to one of the very few countries that was accepting immigrants: Brazil.

Sao Paolo was a large city with a very large poor population. The streets were lined with homeless sleeping in newspapers. He had very little money but was able to rent a room with another young Greek. He didn’t have a job yet and had almost no money. He lived on water and the cheapest, most plentiful food available, bananas. Needless to say, Xen was not too fond of bananas after that.

Xen finally landed a job by telling the manager that was interviewing him: “I will work for you for two weeks. If after two weeks you don’t like my work, don’t pay me.” He was hired and worked hard, and within 1 year became a project supervisor making the same salary as many with 5 years experience.

Xen was promoted several times and was hired by a Canadian company and moved to Canada. At 21 Xen married Evniki Kapsalis. Xen became a father with the birth of his first son George Xenophon Papadopoulos, and then they welcomed another boy to the family, Peter Xenophon Papadopoulos.

In 1970, Xen was hired by a mid-sized civil engineering firm and transferred to Boston, Massachusetts. After being hired by Bechtel Corporation he moved his family to Alameda, California in San Francisco. While attending the Alameda congregation he met Dick Reese, who owned a real estate office. Dick encouraged him to get his real estate agent’s license and Xen was underwhelmed at first at all of the time that went into showing properties without earning any commission. This was his introduction into the world of real estate.

In 1974, Xen and family were relocated to Anne Arbor by Xen’s employer, Bechtel Corporation in order to work on a power plant design. Being the first to move into the small newly built neighborhood, it was like living out in the country. There were wild pheasants and rabbits running through the unfenced back yard and wild strawberries growing here and there. Xen’s wife Evniki would write letters regularly to stay in touch with relatives in Canada and Greece, but Xen preferred the phone and didn’t mind paying the high rates for the costly 5 minute phone call to his parents. During one conversation with his father, he learned that one of the properties in Greece had to be sold in order to help Xen’s eldest sister Sophia pay some bills. Although he felt it was unforunate and family property had to be sold, he was amazed at its increased value. He calculated that in order to save that amount of money, he would have to work at his own job for 40 years with no vacation to earn as much as his father had earned in appreciation by selling the one property. This is when Xen decided that he would have to eventually leave his job at Bechtel and focus on real estate. At about the same time, Bechtel put a halted work on power plants and many many employees were fired. The more valuable employees were offered a transfer. Xen was given the option of transfering to California, or Texas, and chose California. This is where Xen’s passion for real estate would take hold. In 1975 Xen had a desk at Red Carpet Realty where he soon earned the nickname “Xen the Greek.” He even had the magnetic car door signs to prove it.

In 1977, Xen purchased an office building in Garden Grove and Alpha Real Estate was born. He was so excited about real estate at that time that he hired anyone that had the slightest interest in working in real estate. He hired 8 people mostly from his congregation and pumped them up with positive thinking programs and real estate sales seminars like those of Tom Hopkins. However, he soon found out that although they showed interest, they were not passionate and so he eventually sold the large office and moved into a smaller space in Tustin.

In December, 1977 Xen was able to visit Greece without repercussions for not serving in their military. He brought his family; wife Evniki, Children Peter & George. When he returned to Karpathos, his sister Sophia and her family were all visiting at Georgios’ & Anastacia’s home in Pygathia, Karpathos. It had been 19 years since Xen had left and his mother and sister cried out of joy to see him and his family. So Xen and family stayed for 3 months,

A New Year’s 1978 had come and in February, Xen and family returned to the United States. Being away for 3 months was a good break for Xen, but he complained that he had to fight himself in order to get re-motivated. ‘I have to imagine that I’m outside myself. I look at myself and say ‘Xen, get up!! Get moving!” And very quickly thereafter he was working long hours on multiple real estate deals. Nothing matched Xen’s passion for real estate. He worked day and night for years. And even made deals in 1980 and Ã¢‚¬Ëœ81, where a 21% lending rate made it very difficult for clients to buy properties.

In 1982, Xen welcomed a third son Jason into the world with what would be his second wife, Jenny.

After his split with Jenny, Xen stopped attending meetings at the Kingdom Hall of Jehovah’s Witnesses.

In 1991, Xen remarried to Rania and developed a close relationship with her daughters Ria and Iliana. He spent most of their formative years with them, raising them from young girls and they loved him like a father. In 1993, with the unexpected crash of the real estate market, Xen moved his family to Greece. He wanted to take the organizational model and system of real estate to Greece to make a difference. He tried to establish this for many years, but in the end, he deeply regretted it and said leaving the United States to start a business in Greece was one of the biggest mistakes of his life.

Starting over again from nothing, Xen moved to the U.S. in 2006. In a short period of time, he reeducated himself and regained his real estate license and began doing what he loved to do: make deals. He didn’t know how to take it easy and was constantly pushing himself in every way. In 2010 it was discovered that 4 of his heart’s arteries were almost completely blocked. He underwent a quadruple bypass and had to take it easy for a few months. Did he relax? NO! He actually started making phone calls from his hospital bed against doctors’ orders.

He was very passionate about life and about his work. He took financial and real estate seminars, sometimes traveling across country to attend. He read books and took courses. Xen also redirected his attention to spiritual matters and began attending meetings with the Jehovah’s Witnesses. He would often say, “When you think about nature, the world and the universe, there is no way it happened by itself, there has to be a creator.” He began studying again and became just as passionate about his faith as he was about his work.

Most recently, Xen re-enrolled in Tae Kwon Do class and was happy to be in the company of his old friend, Grand Master Kim. He already had earned his black belt many years before, but was looking forward to relearning the art so that he could begin leading the class. For 2 months he arrived early, practiced hard and was always very enthusiastic. Near the end of class on February 25th, 2013, Xenofon Giorgos Papadopoulos, aged 70, passed away of a heart attack.