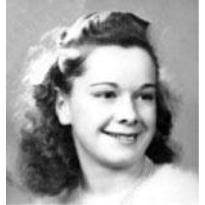 My Mother Winnie was born into the Jane family on March 31, 1922, in
Pittsburgh Pennsylvania. Second of four daughters, Caroline, Ethel and
Irma Mae of William and Beatrice Jane.

As her mother Beatrice was a devote Catholic she and her sisters were
raised in the Catholic tradition attending Catholic schools where they
all graduated. Mother was left handed in school and I remember her on
several occasions talking about how she would get bopped on the knuckles
for it. She was no longer left handed.

Grandma Jane had a great backyard garden; I remember it backed up to a
cemetery. Mom would tell me stories of her and her sisters working in
the garden every summer and then they would go out and sell all the
fruits of their labors around the neighborhood. She didn?t like doing
it, but it sounds fun to me.

Winnie was a beautiful young woman when she married my father, Lawrence
A. Simms in 1942, just before the war years. When the war broke out dad
went into the service and mom traveled along with him. Fortunately,
they did not have to leave the States. Then war ended and before I came
along, they had a pretty good old time camping on Lake Erie, drinking
beers and playing poker in the back yard with friends and family, going
on road trips and the such, sometimes with here sisters and their
husbands and sometimes with his brothers and sisters. I know because I
saw the evidence, they took lots of pictures; Actually, Dad was kind of
a fun seeker, if you know what I mean.

Mom got pregnant two times before I arrived. Unfortunately, the two boys
did not survive. But at last I came along in 1950, her only daughter,
and mom was ecstatic, Of course. Mom was lucky too, I was an easy child
to raise.

Then in 1952 my brother Larry was born. Larry was a sweet brother and a
nice and handsome man, Mom adored him and I did too. He gave mom two
grandsons, Travis now 28 years old, living in Oregon and Shawn 18,
living in Arizona. To our overwhelming sadness we lost Larry in 1989 of
Pneumonia. I don?t think mom ever got over it. Me too.

In 1957 we moved from Pennsylvania, leaving good friends who she still
kept in contact with, following Aunt Ethel and Uncle Ed , eventually to
settle in Torrance, California. Mom worked for thirteen years at Farr
Company in El Segundo in the accounting department. She retired from
office work when she and my dad moved into a retirement mobile home
community in Dominguez Hills. She made many friends their and played
huge amounts of bingo.

After a short time and to her extreme pleasure she became a nanny to the
Ford family in Long Beach. They had two lovely daughters Megan and Mary
that she loved like her own grandchildren and who love her to this day
even though she left and retired after ten years with them to move with
me to Orange County, California where we have been living for the last
five years.

Mom didn?t like the first place we bought, where we lived for two years.
She did like the second one a little better, it was bigger but she had
to do laundry down stairs. Oh how she hated that. But I know she was
very comfortable in the home we purchased a year ago. We were able to
find a place for her with a downstairs bedroom and laundry room, her car
just outside the door and a back yard for the dogs to play and for her
to sit and watch them while she worked on her crossword puzzles. She
wasn?t too crazy for animals but she put up with them because she knew I
loved them. Even so, they, and all my animals, horses, birds, dogs,
cats, loved her and the ones yet surviving are now sad too. They are
looking for her all over the house?.

Mom, you left us too soon, too suddenly. I miss you so.