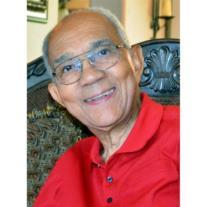 William Winston Grimes was born in Gorgas, Alabama, February 7, 1927, the first son of George and Zadie Grimes. He attended public schools in Cleveland, Ohio. Grimes attended the Ohio State University and in 1950 received his degree in Chemical Engineering. His college career was interrupted for two years, from 1946 to 1948, by a tour in the U.S. Army Tank Corps. During his time at Ohio State, Bill was president of the OSU chapter of Alpha Phi Alpha, Fraternity.

On June 11, 1950 he married Bettie Howell. They were the parents of two sons, Clinton and Kevin.

Bill was employed for 36 years by the Standard Oil Company, of Ohio. Grimes joined Standard Oil after college as a junior engineer in Cleveland. For 7 years he progressed through various positions at the home office in Cleveland before arriving at the Lima, Ohio Refinery in 1959 as a process engineer. In the mid 60s, Grimes, now a group engineer in the Process Engineering Department, would be transferred to Cleveland as a senior technical specialist. Over the next decade and a half, Grimes would be promoted into engineering management. He served as senior project manager at the Marcus Hook Refinery near Philadelphia while that plant was under construction. After its completion, he stayed on as operations manager and, eventually, was promoted to plant manager. In 1981, Bill returned to Lima to manage the Lima Refinery. In 1985 he was transferred back to Cleveland where he was promoted to Director, Refining Technology Division in which he was responsible for central engineering services to four refineries.

Upon retiring from SOHIO/BP in 1987 Bill ran his own management and consulting firm which provided services to MARTECH International Inc., and the City of Lima, Ohio. The firm performed on contracts with US government both directly and as subcontractor, until 1992. In 1993 Bill was hired as Sr. Vice President of Martech, in the West Covina, CA area and was responsible for direction of all their engineering projects until the company disbanded in 2003. Wishing to keep his brilliant mind sharp, Bill decided to work for H & R Block as a tax preparer.

In 2009 Bill and Bettie moved to Laguna Woods, CA, where Bill continued to work for H & R Block, preparing taxes and managing offices. He subsequently passed the Federal enrolled agent exam in 2013 at the age of 86 and was recognized as a master tax preparer. He was with H & R Block for over 11 years. Last year he prepared 336 tax returns.

In previous years Bill was actively involved in professional, educational, community, and fundraising activities, including the American Institute of Chemical Engineers of which he was a Fellow and former director, the United Way of Lima, OH, and past chairman of the board of the Lima, OH Chamber of Commerce.

Bill was listed in “Who’s Who in Engineering” and “Who’s Who in Technology Today.” He is also the recipient of the Distinguished Alumnus Award, the Meritorious Service Citation from the College of Engineering and an Alumni Citizenship Award from the Alumni Association of The Ohio State University. Bill Grimes is the namesake of the William W. Grimes Award for Excellence in Chemical Engineering, which recognizes a chemical engineer’s outstanding achievements as a distinguished role model for minorities. Bill Grimes was the first Black fellow of the American Institute of Chemical Engineering. He’s also listed in “Who’s Who Among Black Americans.”

Bill has been a member of several churches over the years. He was an officer at Murph Chapel AME Church, West Covina, where he helped stabilize that churches financial solvency. For the last several years, Bill has been an enthusiastic member of Saddleback Church, Laguna Woods along with wife Bettie.

Bill’s greatest joys, besides the love of his life, Bettie, were world travel, photography, and being involved in his grandchildren’s many activities.

With his family by his side, Bill peacefully passed on to be with the Lord on Monday, March 2nd. He is survived by Bettie, his wife of 64 years, his son and daughter-in-law, Clint and Cheryl Grimes, of Lake Forest, their children, Justin, Nicholas, and Arianna Grimes, and grandson, Brian Olinger of Kettering, OH. He was preceded in death by his parents, his son Kevin Grimes, and his younger brother, Willie George Grimes.

Come join us for: