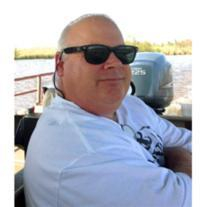 Born in Prosser, WA to Jim and Gail Surch, Billy was raised in Lompoc, CA. After Billy graduated from Lompoc high school as an all CIF football player in 1978, he attended Hancock Junior College, where he excelled in both football and baseball. Bill graduated from Cal State Stanislaus with his business degree. He met Tasia (Gorgeous), they later married on June 24, 1995. He was preceded in death by his parents and his brother Jimmy Surch.

Bill was the father of 4 sons: Nick Paloukos, Matt Robinson, Billy-Ray Surch and Casey (A.J.) Surch. With an infectious smile and a one of a kind sense of humor, Bill was the happiest man on earth. A loving and devoted father and husband who loved his wife, kids and dog Ruger, Bill was a fiercely, loyal friend and a dedicated, ethical businessman, Bill was loved by everyone he knew. Many of Bill’s friends gave him nicknames over the years including: $ Bill, Squiggy, Valley, Classic Bill, Buck, Uncle Bill.

Bill was active with all his sons sports teams, while coaching basketball, Bill’s team won an NJB Allstar National Basketball Championship in 1998.

Bill worked successfully for several computer software firms for over 25 years, the last 8 years spent at IBM. Bill loved his job and the people he worked with.

Bill is survived by his wife, Tasia; his children, Nick Paloukos, Matt (Fawn) Robinson, Billy Ray Surch and Casey Surch; three grandchildren: Jackson, Christian and River Robinson (whom which Bill named); his sister Patty (Bill) Barnett; and his faithful companion Ruger. The family would like to thank all the support from family, friends, neighbors, coworkers and all the other lives Bill touched. Bill had the “Best Life Ever”! We love you!!!!!!