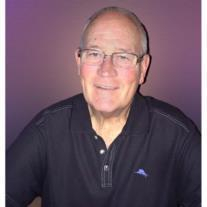 William “Bill” Patrick Hayes passed away from a sudden massive heart attack on Tuesday, November 10, 2015 at the young age of 67.

Bill was born in Long Beach, California on March 2, 1948. He was the 2nd of four children born to James and Marjorie Hayes. After graduating from Millikan High School in Long Beach he attended the University of California Santa Barbara on a football scholarship. He transferred to California State College, Long Beach where he graduated with a Bachelor’s Degree in Economics in 1971.

Bill worked for Shell Corporation in sales and eventually owned and operated five gas stations. After selling the stations, Bill continued to work in sales as a seafood broker and eventually went on to work for Chef’s Warehouse where he was employed. Bill loved sports, especially surfing, football and golf. He would spend part of his weekends watching whatever sport was on TV. Golf was his passion and he played many times during the week for years until his back hindered him from playing.

Bill is survived by his loving wife Janet of 25 years. They were married on November 17, 1990. One of Bill and Janet’s favorite things to do together was to take cruises (10) to Mexico where they could relax and enjoy their time together. They also enjoyed dining out and loved their two dogs Sophie and Stella.

The funeral service will be held at Crossline Community Church in Laguna Hills in the Chapel on Thursday, November 19, 2015 at 11:30 am. A graveside service will follow at 2:15 at El Toro Cemetery in Lake Forest.

Bill was a loving husband, father, grandfather, brother, brother-in-law and uncle and he will be truly missed but we are confident we will see him again one day.