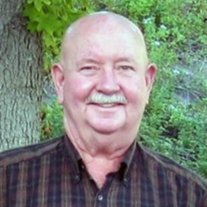 William Park McComas, 75, of Mission Viejo, CA went into the loving hands of Jesus on October 11, 2013. Bill is survived by his loving wife, of 56 years, Valerie, his son Bob, of Mission Viejo, his daughter Cheryl, his son-in-law Mario, his granddaughter Melissa, and his grandson Gregory, all of Mission Viejo. Bill is also survived by son Mike and daughter-in-law Laura of Hemet. Bill passed away, after a courageous battle with lung cancer, in the comfort of his own home with family by his side.

Bill was born on July 19, 1938, in Los Angeles, CA where he attended and graduated from Los Angeles High School. It was at L.A. High School where he met his high school sweetheart Valerie. While in high school, Bill was an active member in the Order of DeMolay as Master Councilor while Val was Worthy Advisor in Rainbow Girls. Bill enlisted in the Air National Guard in 1956 and while in the service he worked at Hughes Aircraft. In 1957 Bill married his high school sweetheart and they began their family shortly thereafter. They welcomed their son Michael in 1958, their son Robert in 1961, and their daughter Cheryl in 1963. They raised their three children in Lakewood and Cerritos.

After Bill’s military service concluded, he joined the Los Angeles County Sheriff’s Department in 1960. While employed by LACSD for 35 years, Bill worked a variety of bureaus which included Wayside Jail, Lakewood Patrol, Administrative Services, Robbery, Metro Bureau, Violent Offenders Impact Team, and concluded in the Homicide Bureau which spanned from 1980 to the year of his retirement in 1995.

While Bill and Val were young parents raising their family in the 60s and 70s, they enjoyed camping trips with family and friends, clam digging at Pismo Beach, and river trips to Parker, Arizona for boating and skiing. As their children got older, Bill and Val enjoyed the more luxurious form of vacationing…cruising. It was being out on the open sea which led Bill and Val to purchase their 34 foot Catalina sailboat, which they named ‘Valiam’ (a combination of Valerie and William). Enjoying several years of sailing, Bill and Val decided to partake in a less strenuous form of boating, so they traded in their sailboat for a 42 foot California Trawler power boat which slept 6 comfortably. They named their boat ‘Melissa Ann’ (after their one and only granddaughter). They enjoyed many boating trips with family and friends to Catalina, Dana Point, San Diego, and Marina del Rey.

When Bill and Val retired to Mission Viejo in 1994, Bill became very interested and skilled in computers and was often called upon by family and friends to help them out of computer mishaps. He was always ready, willing, and available to drop what he was doing to help solve any computer and printer problem.

Bill also enjoyed playing golf during his retirement years. He played weekly for the Casta del Sol Men’s Golf Club, along with many weekend over-nighter tournaments and benefit tournaments. Bill also enjoyed holding the position of secretary for the men’s golf club and also produced the golf club’s quarterly newsletter for several years until his diagnosis in 2012.

Bill and Val also enjoyed years of participating in a monthly card group with friends, weekly dinners at their favorite restaurants with family and friends, weekend BBQ’s with family, attending their granddaughter’s volleyball games, their grandson’s baseball games, along with caring for and spoiling their miniature poodle Bailey.

Bill and Val became members of Mission Viejo Christian Church in the late 90s and Bill felt a calling to voluntarily serve as the Sunday morning church audio/visual coordinator. He proudly served in this position until 2011 when his time was directed to help care for Val due to a broken shoulder which occurred during a family Hawaiian cruise. Bill lovingly cared for Val until she recovered and it was after her recovery that Bill’s lung cancer had surfaced and the journey started for Bill to combat his cancer. Bill endured chemotherapy and various cancer-related complications along the way; however, his love of life, tremendous strength during treatment, sensibility, and sense of humor was evident until the bitter end.

Bill will be remembered with great affection by family and friends. We will miss his kindness, his willingness to lend a helping hand, his sense of humor, his wisdom. His absence will always be a tremendous loss to all who knew him, but our lives are enriched by having him in our lives, and the thought of Bill will always bring a smile to anyone’s face.

Rest in peace with the Lord in Heaven our sweet Bill, Dad, Grandpa, Mac…friend. We love you and we’ll see you soon.