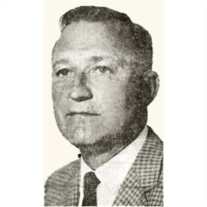 William (Bill) J. Barr was born on November 15, 1926, in Plattekill, New York. He was the son of Robert and Margaret Barr who had immigrated to America from Northern Ireland. Bill attended a one-room schoolhouse with his older sister, Anne and his younger brother, Bobby. Because of his strong academic skills, he skipped two grades and graduated from high school when he was only 16 years old.

When he turned 17, Bill joined the US Navy and served in WWII in the Pacific. When the war was over, he attended Rider University in New Jersey on the GI Bill and graduated in three years with a degree in accounting. Upon graduation, he went to work for the Newburgh Savings Bank, where he stayed (through its many name changes) for his entire 50 year banking career. He rose to President of the Newburgh Savings Bank and later served on its board of directors.

It was after Bill began his banking career that he married his wife of 65 years, Nancy J. Gribbin. They had four children together, Bruce, Mark, Robert and Margaret. Bill was also very active in his community. He volunteered as a Boy Scout leader for 16 years, and was an elder and treasurer for both the Calvary Presbyterian Church and the Hamilton Union Presbyterian Church. He was on the board of directors for the McQuade Foundation, volunteered at the veteran’s hospital, and volunteered at the Center for Disability Services in Albany, helping to teach gardening.

Bill had a strong faith in God, and involvement in church was an important part of his life. He enjoyed many hobbies. He was an avid golfer, tennis player, fisherman, swimmer and cross-country skier. He also loved gardening and cooking.

Bill was preceded in death by his sister, Anne, and sons, Bruce and Mark. He is survived by his wife, Nancy, his brother, Bobby, two of his children, Robert and Margaret, his daughter in-laws, Kikue, Donna, Caroline, and Mika, son in-law, Ramin; his 11 grandchildren, Randy, Kara, Melanie, William, Nancy-Kate, Kiko, Kana, Emily, Claire, Kazuma and Sayo, and his 6 great grandchildren, Alexis, Zachary, Benjamin, Jillian, Elliott, and Miles.

Bill was a wonderful husband, father and grandfather. He died with his family at his side after a long illness. He was beloved and respected by his entire family and community. His presence will be greatly missed.