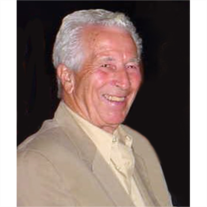 William Grover Smith, Jr., 94, the son of William Grover Smith, Sr. and Annie Davis Freeman Smith, was born August 13, 1922 in Harrodsburg, Kentucky and passed away February 24, 2017 at his home in Trabuco Canyon, California.  After high school, William honorably served his country in the U.S. Army.  After his military service, he worked as an Electrical Engineer for 30 years with McDonnell Douglas.  After his retirement from McDonnell Douglas he worked 30+ years as General Manager for Save Most Business.

Bill was a good man, friend, dad, grandpa and great grandpa with many interests and stories to tell. He loved his family, job, horse races, Don Julio, golf, travel back home to KY, and other favorite destinations (Mexico, Palm Springs, Hawaii). He lived a full 94+ years and will be missed by those who knew him.