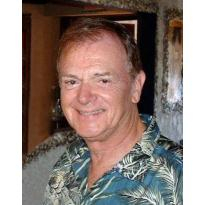 William Gresham ‘Bill’ Nikkel grew up in Eugene, Oregon. His grandparents, William Gresham and Nancy Sistler Gresham of Portland, were part of his loving family circle.

In 1946 the family, including his father John Wayne Nikkel 1917-1977 and his mother, Genevieve Marie Nikkel 1911-1999 and his two small sisters, Marjorie and Patricia, moved to Alpine, California, where they lived in the country at Bird Haven Lodge, an adobe home with a stone and iron fence. Alpine was a golden time for all of the Nikkels. There was lots of fresh air, and fields and meadows for children to roam.

The 1950s were a time when wonderful vehicles were being designed and built. Bill’s 1956 cream and red Chevrolet was his pride and joy. With best friend, Paul Wylie, he spent hours keeping the car in perfect condition. His first ’45’ record was Bill Haley and the Comets ‘Rock Around the Clock,’ played at top volume to the delight of his sisters.

Bill served in the National Guard.

Bill spent a year working at a lumber company and stayed with Robert, Phyllis, Gregory and Deborah Nikkel in Sacramento before he returned to San Diego City College. His business, accounting, technical and expertise in financial management and real estate began to blossom and he enrolled at University at California at Los Angeles, where he earned his MBA.

Bill’s career was with Hughes Tool in Los Angeles as comptroller. He received many commendations through his years there, but always made time for helping others. One of his pet projects was A-Man, an educational and vocational training program for those who didn’t enjoy as many opportunities as Bill had.

Bill studied trumpet as a youngster and his training in music served him well when he joined a barbershop group, sharing his voice as well as his fund raising skills for the group.

Bill married Linda Larsen in 1959 while he was in college. They lived in Palos Verdes Peninsula. In 1966, they were blessed with a daughter, Diana Lynn Nikkel, who now resides in Soquel.

The couple divorced in the mid 1970s.

Bill later met and married Paula Matus, the light of his life. They were married in 2000 in Dana Point, where they spent many happy years working together on their lovely home and making time for wonderful travel adventures.

Paula lovingly cared for her ‘Billy’ at home, where he chose to be after months of not-pleasant hospital stays. She was with him when his time to leave this world arrived.

To his family, Bill was a funny, bright, intelligent and always stimulating companion. There was no subject about which he was not curious.

Those who loved and survive Bill are his wife, Paula, his daughter, Diana, sisters Marjorie Van Nostrand and her husband, Richard, of Burke, Virginia, and his sister, Patricia Fleschner of Trinidad, California.

Nieces and nephews are Bonni Van Nostrand Rooney of San Diego, Tom Van Nostrand and his wife, Claudia, of Arlington, Virginia, Ashley Fleschner and his fiance, Andrea Geerdes of Portland Oregon, and David and wife Gina Fleschner of Portland, Oregon.

Great-nieces and nephews are Jenny Rooney and her fiance, Greg, of San Diego and Sebastian, Eloise, and Georgia Fleschner of Portland Oregon.