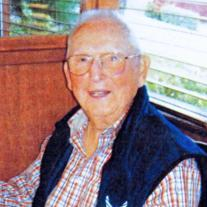 Bill was born in Graham, Missouri on April 9, 1921. His parents, Harley and Thelma, were two people who believed in leading by example. His mother and father both exemplified the Christian spirit by helping those in need whenever they could. Throughout the Great Depression his family fed and housed anyone who needed help.

Bill learned from a very early age that compassion for others, the love of fellow man and hard work was what the God of this universe expected and he exemplified all these traits and more throughout his life.

He joined the National Guard Artillery Unit in his home town with several other classmates in 1939. it was not long after that the Second World War changed our planet forever. His unit was activated to active duty and through a chain events, Bill ended up in the Army Air Corp, later to become the United States Air Force. He had several dangerous assignments, but the one assignment that changed his life forever was when he was sent to North Africa to ferry wounded servicemen out of battle to our military hospitals. This is where he met the love of his life, his wife of fifty years, Velma. He said, “It was love at first sight.” Call it fate or Divine Intervention, but whatever it was, Velma was assigned to be flight nurse on Bill’s Aircraft. The rest is history. Bill and Velma were married in Cairo, Egypt as the war was coming close to the end. Back in the United States they gave birth to their only child, a son who they named after Bill.

It was not long after that Bill, Velma, and JR would find themselves in Germany where Bill flew in the Berlin Airlift. This would always be one of his most favorite accomplishments while serving his country because it showed the whole world that our United States exemplified the Christian values our great nation was found on, love and compassion for others even for our enemies.

During the Cold War Bill was assigned to the Strategic Air Command, where he was very much involved in shrinking the size of the world by helping in the establishment of air refueling allowing our aircraft to fly all over the world without landing for fuel. He spent many months away from home flying out of Air Force Bases all over the world. His wife Velma and son JR stayed on base in the States throughout much of this time.

In 1961, Bill was sent to Command and Staff College in Montgomery, Alabama where he not only graduated with honors but we as a family received an education in freedom and civil rights by living in a city that was knee deep in extreme prejudices. It was quite an experience as we actually witnessed history in the making as many gave their lives for what they believed in.

In 1962, Bill and his family were reassigned back to Germany where he was involved in top secret flights into enemy lands. While there we saw what communism can do to human beings who are held hostage by a perverse and godless government.

After four wonderful years in beautiful West Germany, Bill was sent back to the States and spent the next three years flying KC97 Air Refueling Tankers out of Barksdale AFB, LA.

His last four years in the service found him at Vandenberg AFB, CA. where he was chief of information coordinating a liaison between the base and the City of Santa Maria. While there he was president of the Arts Council and established a non profit organization that was responsible for building The Boys & Girls Club of Santa Maria.

In 1976, Bill took on a new career managing eight bariatric clinics for an old friend of the family, Dr. Duane Albert. This move brought him and Velma to Orange County where they resided at El Toro Mobile Home Park for many years.

Through this period of time, Bill and Velma met and made many new and wonderful friends. They were so happy and within this closed community they felt safe and secure as all in the park were like one big happy family and cared and watched out for each other. Sometime in the early 80’s Marion Stevenson, Velma’s sister moved into Bill and Velma’s home to help Bill care for Velma, as she began to be affected by the onset of Alzheimer’s. The love and special attention they showed Velma over the years allowed all who knew them to see just how important close and constant and loving care is extending Velma’s life way beyond the expected time. Eventually this task became too difficult for Marion, who was in her 80’s and Bill who was also in his 80’s.

Bill then met Christine Hildebrant at the park and hired her to come into his home to care for his loving wife. While caring for Velma, Bill developed a respect and love for Christine which eventually led to marriage after Velma finally succumbed to the disease she suffered from so many years.

As difficult as Bill’s life had become, one more tragedy would affect Bill in such a way that he would never be the same again. One evening while at the club house in the park Bill’s mobile home caught fire where he lost most of everything he owned and loved.

This really changed his life as can be expected and Chris and Bill were forced to find a new home. They eventually found a nice condo in Dana Point overlooking the ocean. Here Chris and Bill spent many enjoyable years together.

Bill persevered through all this tragedy and turmoil through strength of the Holy Spirit living inside of him and of course by the love of Chris and all his friends who supported him.

Bill continued to enjoy his life and being an avid golfer, he was able to get out and participate in his favorite sport on a regular basis where he made many new friends along the way. Eventually Bill became involved in a wonderful senior golf program at Lake Forest Golf & Practice Center called “outdoor explorations” where he became an ambassador and added his unlimited energy and special talents. Everyone there loved and respected Bill so much and he was so aware of how all of those friends were genuinely concerned for him. The director of the program Angela “Angie” Kelly became a very important and loved friend who gave Bill a new sense of worth and the memory of her love will never be forgotten. Bill was still contributing to outdoor explorations until the last week of his life and it was undoubtedly one of his fondest parts of his final years here on Earth.

Bill changed the world everywhere he went. Once a person met him they were affected by his love of fellow man, his never ending energy, and his ability to get things done no matter what the task. He affected changes in the Air Force that are still present today. Through out his life, he entertained thousands with his jokes, skits, harmonica, his incredible tenor voice, and so many talents he could use to bring happiness to all. He will certainly be missed by all who knew him.

He is survived by his wife Christine, his son JR (William Glenn Alloway, Jr.), three grandsons, Jobe, Odinn, and Aaron, six great-grandchildren, and many nieces, nephews and cousins.