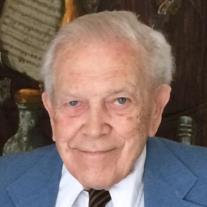 William Frederick Born died at his daughter’s home in Lake Forest, California on Thursday, Feb. 19, 2015. His wife of 68 years, Lee, his three daughters and two of his grand-daughters were at his side. He was 92 years old.

Born September 13, 1922 to Carl and Margaret Born in St. Louis, MO, Bill was the youngest of the four children and the only boy. His sisters were 18, 14 and 10 years older than him; he was often mistaken as the son of his oldest sister. Dorothy, Margaret and Louise have all pre-deceased him.

Bill graduated high school in St. Louis and went on to begin studying engineering at Washington University until WW2 started. Bill moved to Washington DC in 1942 to serve his country through a position in the Navy Department. There, he met Leola Pruitt in the employee cafeteria. In 1946, Bill and Lee got married, and made plans to move to Pennsylvania, where Bill would begin his career in engineering for Westinghouse Electric Corp. He was one of the first employees at a new plant Westinghouse had acquired in Beaver, PA.
In 1948, the first of three Born girls was born. Donna was followed by Barbara three years later and then by Cheryl after another three years. Bill was always surrounded by women, just as he had been as a child. He was a great daddy to his girls, teaching them to be self-reliant and strong. The Born family was well known in the community of Beaver and were active members of the Park United Presbyterian Church.

Bill would work for Westinghouse for 41 years, as an engineer, and in management. Later in his career, he was selected to be the Westinghouse representative to NEMA (National Electrical Manufacturers Association). In this position, Bill traveled the world, meeting with NEMA officials and drawing up international standards for electrical equipment. Often, Lee would travel with him. Together, they were able to see much of the world. Bill retired from Westinghouse on May 1, 1983. He worked as a consultant for NEMA for several years, finishing his work career in December of 1987. Since all of their daughters had moved to Southern California and were raising their families there, Lee and Bill decided to move to Thousand Oaks, CA in 1988.

Bill was an active member of the Masonic order, was a Shriner, and achieved the third degree of the Scottish Rites. He was awarded his 50 year pin in 1994. He and Lee also joined the Westminster Presbyterian Church in Westlake Village, where he served as an usher for over 20 years. His primary joy throughout his retirement was travel. He and Lee loved to cruise, taking 32 cruises over the years. They took their last Princess cruise just last year out of Long Beach. They rarely left the ship in the later days because they had already seen all the ports. .
He was a healthy man for his entire life. He was a man who was admired by everyone who met him. He provided a role model for many, as a hard-working, dedicated, and loving man. He always had a twinkle in his eye and a “Grampy” joke for the grandkids, who loved him dearly. As stated on their Facebook posts, “He was the greatest man that we ever knew and the leader of our family. We can take comfort knowing he will continue to watch over our family in the same way he did the last 92 years”

He will be buried on Saturday, March 7, at El Toro Memorial Park in Lake Forest, CA.