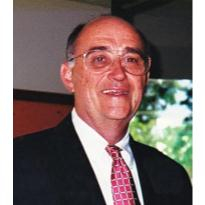 William Charles Mecklenburg, 75, died Friday, March 25, 2011 at home in Coto de Caza in the presence of his family after a courageous battle with Parkinson’s and Dementia.

Born and raised in Walworth, WI, the son of William and Letha Andrew Mecklenburg, he lived from coast to coast during his career, but retired in Fontana, WI while spending his winters on the Southern California coast. He met his wife at Lake Geneva, WI and they both attended and graduated from Northwestern University. They married in 1958 in Hinckley, IL.

He served in the U.S. Air Force Reserves prior to joining Jones & Laughlin Steel, which became LTV Steel. He truly enjoyed his customers and co-workers during his 38-year career. Mr. Mecklenburg retired from LTV in 1999 to travel with his wife, enjoy time with his children and grandchildren while always leaving time to play golf and fish. Bill had a passion for golf, which began when he was a young caddie and ultimately the Caddy Master at Big Foot Country Club in Fontana, WI. In retirement, he joined the club that introduced him to the game and enjoyed hundreds of rounds with family and friends at his favorite place on earth.

He loved his family deeply and unconditionally. He was admired and appreciated by everyone he touched with love and laughter.

A Funeral Service will be held on Friday, April 1, 2011 at 4:00pm at Community Lutheran Church 30322 Via Con Dios, Rancho Santa Margarita, CA. A Viewing will be presented from 3:00-4:00pm at church prior to the service. The family will also hold a Memorial Service at the Fontana Community Church in Fontana, WI on Saturday, July 2, 2011 at 11:00 A.M.

In lieu of flowers, the family wishes for donations to be made in Bill’s name to the Parkinson’s Disease Foundation, the Lewy Body Dementia Association, the Children’s Craniofacial Association, Community Lutheran Church or the Fontana Community Church.