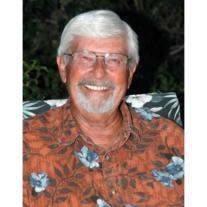 William Fred “Bud” Obermeyer passed away surrounded by his loving family in Laguna Niguel, CA on Wednesday, October 24th, 2012 after a lengthy illness. He was 79 years old.

Bud was born on September 8, 1933 in Los Angeles, California to Fred and Virginia Obermeyer. As a young child, Bud lost his father to a sudden illness. While he had no siblings, he had a great relationship with his mother that continued throughout their lives until Virginia passed away in 2001. Bud married his wife Moira on May 26, 1956 in Los Angeles, and they were partners and best friends for the past 56 years. Bud and Moira have four wonderful children and 11 grandchildren.

Bud worked for over 30 years at McDonnell Douglas, with his final position as Contracts Director for the Space Station program, before retiring and working part time as a property management specialist until he fully retired in 2009. He was an active volunteer in many organizations within his church and loved outdoor activities with his children including golfing, softball, and sailing as well as being equally active in supporting his grandchildren in their respective activities. He was always the practical joker and allowed his close family and friends to be part of that additional livelong “hobby”.

In 1972, Bud moved his family from the San Fernando Valley to Orange County and subsequently bought his dream home in 1986, the home where he eventually lost his battle with Cancer. Bud wrote his own living autobiography during the last few years of his life so that his children and grandchildren could fully understand what he had learned over the course of his life, and the importance of family. Bud was always thinking of the best ways for his family to stay close even as that family continued to grow into future generations.

Bud is survived by his loving partner and wife, Moira, of Laguna Niguel, his son Steven (Paula) of Rancho Santa Margarita, his son Michael (Lori) of Aliso Viejo, his daughter Valerie of Anaheim Hills, and his son Kurt (Heidi) of Manhattan Beach. In addition, Bud is survived by his 11 grandchildren, numerous family friends, and, of course, his two dogs Beau and Toby.

Bud was the ultimate patriarch to his family and showed each and every day how to best live life to the fullest and was the one person everyone went to for advice, support, and honest feedback. He was the core of the Obermeyer extended family and will be missed in ways that are too numerous and difficult to explain.

The family will have a Rosary and viewing reception on Thursday, November 1st at O’Connor Mortuary in Laguna Hills at 7:00 p.m. In addition, the funeral mass will take place Saturday, November 3rd at 10:00 a.m. at St. Timothy’s Catholic Church in Laguna Niguel, CA. with a reception to follow. For further information, and directions to the Rosary and funeral, please go to www.oconnormortuary.com/obituaries/william-obermeyer/.

In lieu of flowers, the family requests that all donations be sent to City of Hope via their website, www.cityofhope.org, as they were instrumental in supporting Bud throughout his illness.