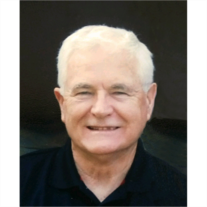 A native of San Francisco, Bill passed to rest with his Heavenly Father surrounded by family. He was the second son of the late Bernice (Parkinson) and John Leet. Bill was a graduate of Archbishop Riordan High School and San Francisco City College; receiving a Horticulture Degree.
Bill retired as a Sergeant in the San Francisco Police Department in 1992, after spending 32 years with the City and County of San Francisco. He was born and lived in San Francisco until moving to Burlingame in 1971 and he always held a firm affection for the City by the Bay.

Bill was preceded in death by the love of his life of 51 years, Maurene (Murphy) Leet and his brother, Robert Leet. He is survived by his 3 loving children Michael (Jean), Melissa Kanan (Dave), and Cortney Vanis (Mike) and his sisters, Kathryn Rosenthal of Pollock Pines and Marcella Gagne of Pacifica. The light of his life were his 5 grandchildren Brooke and Sydnee Leet, Brendan, Michael, and Nathaniel Vanis. He is also survived by many nieces & nephews.

Bill enjoyed spending time with his beloved family whether in Burlingame or the family’s favorite vacation home in Lake Tahoe. He had a love for the outdoors, looking forward to his hunting trips each year and making wine with his wonderful friends. He enjoyed volunteering with the Police Athletic League, was recently recognized for 50 years as a Hunter Safety Instructor and a member of the Coyote Point Rifle Range. He was an active parishioner of Our Lady of Angels for over 45 years.

He will be missed by many.

In lieu of flowers, donations in Bill’s memory may be made to the Riordan Class of 1956 Scholarship Fund, Rocky Mountain Elk Foundation, NRA, Coyote Point Rifle and Pistol Club or the charity of your choice.