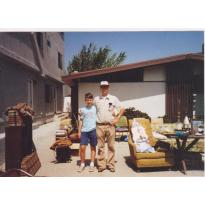 Bill Owen was born, August 12, 1928, and lived in the Oak Park/Chicago area. He met and married Clara Mae and they had 7 children: Mary Jane, Claire, Bill, Elizabeth, Tom, John and Jim. In 1962 he started working for Jet Propulsion Laboratory and they moved to Pasadena. Clara Mae died in 1970. He then met and married the love of his life Martha Ruth. She had the great bonus of: Debby, Laury and Jacy. They enjoyed 21 amazing years together. He moved to Rossmoor Towers in Laguna Woods in 2002 until 2010. He was then in the Villa Valencia Skilled Nursing Facility until his death.

He was a true renaissance man. He had a brilliant mind; was literally a rocket scientist for NASA and Cal Tech. He had a double major in college at Loyola of English and Psychology yet also earned a minor in Mathematics. He went on to Illinois Institute of Technology and earned another BA in Chemical Engineering. He played multiple instruments including piano, saxophone and cello in Orchestras. He was a Boy Scout Leader and enjoyed the outdoors. He loved his Catholic faith and was a lector for many years. He took numerous photos and was always with his camera bag around his neck. He was a devoted, loving, supportive husband, father, grandfather, great-grandfather & friend.