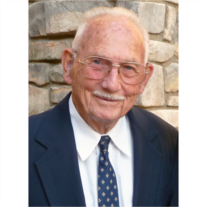 Wesley Leon Wilson passed away on Sunday, January 10, 2016 in Mission Viejo, California. He was 97. Wesley was born in Paris, Texas in 1918, the son of Nettie and John Wilson. He grew up in Paris and graduated from Paris High School in 1936.

After high school Wesley worked in advertising for the Paris News and the local radio station, and later worked as bookkeeper for a local auto dealership.

In late 1940, with America’s entry into World War II still on the horizon, Wesley joined the United States Marine Corps where he served with distinction. Rising to the rank of Sergeant Major, he fought in the Pacific in the battles for Saipan and Okinawa and later participated in the occupation of Japan. Following the end of the war he remained in the Marine Corps and served in a variety of duty stations. In 1952, he was promoted to lieutenant, and in 1955 to the rank of Captain. Wesley retired honorably from the Corps in 1962 after over twenty years of service.

After his military retirement Wesley began a second career as an assessor with the County of Orange in southern California. He continued in this endeavor until his retirement in 1979.

In September of 1947, Wesley married Lovella M. Duggins in San Diego, California. They remained happily married for 56 years while raising their children, travelling and maintaining and supporting a wide circle of friends and family. As a member of the Catholic Church, Wesley was active in each of parishes in which he lived. In retirement, he was an active volunteer assisting patients at St. Joseph’s Hospital in Orange.

Wesley was preceded in death by his wife, Lovella; his first son, John; his parents Nettie and John; and his brother, William Wilson and sister, Dorothy Jones. He is survived by his children, David Wilson, Cynthia (Randy) McCann, Michael (Barbara) Wilson, Leslie (Charles) Raasch; his grandchildren Erin (Matthew) Daly, Nicholas (Nathalie) McCann, Leena McCann, and Annabelle Wilson; and his nieces and nephews and other relatives.

In lieu of flowers Wesley had requested memorial donations be made to a charity of your choice.