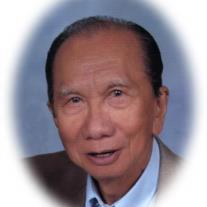 Wenceslao Urbiztondo Santiago, Jr., 86, passed away peacefully on Wednesday, October 14, 2015 at Saddleback Memorial Hospital, Laguna Hills, CA.
Wenceslao was born on November 3, 1928 in the province of Tarlac, Philippines. He was the sixth of thirteen children of Wenceslao Esquerra Santiago and Filomena Sarzuela Urbistondo. Growing up, he learned to value family, good education, hard work, and faith in God.
Wenceslao attended Paco Catholic School and Far Eastern University High School in Metro Manila. Primarily cerebral in nature, Wenceslao exhibited clear and quick thinking at understanding difficult subjects or complex, abstract ideas at an early age. As a high-achieving student, Wenceslao excelled in mathematics and science, performing at the top of his class and receiving many praises and accolades.
Wenceslao attended the Mapua Institute of Technology where he received his bachelor’s degree in Architecture and Design. Following in the footsteps of his father, Wenceslao worked as a land surveyor for the Bureau of Lands for many years until his early retirement.
On January 30, 1963, he was united in marriage to Apolonia Bermudez at St. Raymund Parish Church in Moncada, Tarlac, Philippines. They lived in Baguio City for several years before moving to Quezon City to raise their only son, Gil Santiago. In 1978, Apolonia emigrated to the United States, with the rest of the family joining several years later. They settled in Laguna Woods, CA (previously known as Leisure World) where they lived most of their senior life. Wenceslao was a devoted husband and father, providing constant support and loyalty. He enjoyed reading, politics and the real estate market.
Wenceslao is survived by his son Gil and his wife Carol of Morton Grove, IL, and their two children, Kristoffer and Kristin, his siblings in the Philippines: Consolacion Duba, Rosario Bade, Hermes Santiago, and Jesus Santiago, as well as Aurora Santiago of Riverside, CA.
Wenceslao was preceded in death by his wife, Apolonia, on September 23, 2012, his parents, his siblings in the Philippines – Jose Santiago, Enriqueta Saplala, Romeo Santiago and Carmen Almario, and Avelina (Belen) Sanchez of Cerritos, CA, Zenaida (Ned) Ramos of Corona, CA, and Reynaldo (Dandy) Santiago (Modesto, CA)
A prayer vigil will be held on Sunday, October 18, 2015 from 4:00 – 6:00 at the O’Connor Mortuary, 25301 Alicia Parkway, Laguna Hills, CA 92653.
A funeral liturgy will be held on Monday, October 19, 2015 at 9:00 AM at St. Nicholas Catholic Church, 24252 El Toro Road, Laguna Woods, CA 92637. The funeral procession will proceed immediately to the Interment at Ascension Cemetery & Guardian Angel Mausoleum at 24754 Trabuco Road, Lake Forest, CA 92630.
A reception will follow Interment.