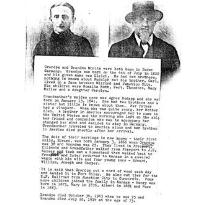 I was born on our farm located about 7 miles north of Junction City, Kansas. My parents were Albert Moritz and Agnes Oliver Moritz and I had 5 sisters and two brothers. Mother and Dad gave us lots of love, gentleness and guidance. I remember the fried chicken, watermelon and mother’s cinnamon rolls. Dad took me fishing and hunting-there are many fond memories of both mother and dad.

In about 1938 I caught a ride to Seattle and stayed with Aunt Nell and Uncle Dick and cousins Bud and Dorothy for a couple of months. One summer Ted Burnett and I drove to Denver in his Chevy Coupe. We stayed with his sister and also visited cousin Hazel. We climbed Pikes Peak on the cog rail. In the fall of 1940 I worked at Fort Riley in the build up of the fort for the war. I saved enough money to buy a 30 Chevy 2-door and in the spring of 1941 Marcus Stice and I drove to California. I worked for Douglas Aircraft until September of 1942 when I joined the Navy. I was discharged from the Navy in January of 1946.

I was married in March 1943 to Marjorie Benton. We had four children: Michele, Keith, John and Jeanine. They all live and work in Southern California. I have 10 grandchildren and 5 great-grandchildren. I worked in the construction trade from 1946 until 1984 when I retired.

I met Terry Kater Benny in 1969 and we have been married since 1982. Terry has 3 children, Mary, Linda and Louis, 13 grandchildren and 9 great-grandchildren. I have spent my time since retirement doing many improvements to our home and yard work and gardening. I started playing golf in 1992. I wish I had started earlier in life as it is much fun. I’ve had a lot of good times and some bad in life but all in all it’s been great. Time passes so fast-it seems only yesterday that Momma was rocking us to sleep, Dad was listening on the crystal set and lots of homework being done around the oak table with a kerosene lamp.