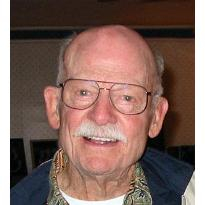 Warde ‘Pod’ & ‘Poppa’ Hazard, 88, peacefully passed away this past Monday morning November 30, 2009 after a long fight with pneumonia. His family was by his side during his last few days and we are relieved that his recent struggles with a ventilator and feeding tube are over.

Warde was born in Bishop, CA, in 1921 and moved to Long Beach as a 4 year old, staying there until he and our mom moved to Mission Viejo in 1979. He and Dorris remained married for 65 years. Dorris passed away in 2007. He graduated from Long Beach Poly High School in 1938. When he was in the Navy during WWII—based in Long Beach!—his job was playing saxophone in the Navy Big-Band! Warde retired as an Inspector for the City of Long Beach Chemical Testing Laboratory and continued playing the sax professionally in numerous Big-Bands in Long Beach and Orange County after retiring.

We’ve been thinking of a brief phrase that would describe Warde and it would have to be: ‘What-A-Character!!’ An example: Warde was still riding his motorcycle Honda Shadow 500 at age 80—until we took it away from him. Karil reminds us that the first time she met him, Warde was in the street sitting backwards on the handlebars of a bicycle, pedaling around in circles. He was 63 at the time!

We’re planning on having a celebration of Warde’s life at Sharon’s house on Saturday, December 12.

Please RSVP if you can make it: This is a gated community—SeaCliff—and the gate will require your name in advance for entry. If you can think of anyone that would appreciate this notification, please pass it on. –Thanks!