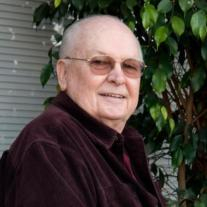 Age 75 and a resident of Laguna Hills for over 30 years passed away peacefully on Tuesday, August 28, 2012 at his home. He lost a courageous two-year battle with Mesothelioma which, to the end, he maintained that he would win. He was born to Clara M. Brooks Nielsen and Walter Bagge Nielsen in 1937 in Waukegan, Illinois.

Wally was one of four children in the family. When he was four years old the family moved to to South Beloit, Wisconsin where he lived until he graduated from high school. As a boy, he was fascinated with airplanes and spent many late afternoons at the municipal airport watching airplanes take off and land. At age 11, he began working in his father’s business, The Sinclair Oil Station, and continued until he completed high school.

After graduating from high school, Wally’s love of flying got the better of him. A local flight instructor named Don of South Beloit, Wally’s mentor, moved to Tucson, Arizona. Wally followed Don to Tucson Arizona in 1955 and obtained his private pilot license, commercial pilot license, multi-engine license and instrument rating. Wally once told a story about how he could fly an airplane upside down under telephone wires. He bought two airplanes: a Cessna 140 and a Swift. He kept the Swift until 1962.

In 1960 he was selected to be a member of the United States Naval “Air Cat” program. This was a select group which required extensive testing in order to gain admission. As a member of the Air Cat program, he was deployed to NAAS Memphis and completed his training at NAAS Jacksonville. He was a member of a P-2V squadron specialized in ordinance ie bombs rockets and the like. He remained on active ready reserve until July 1, 1966.

Wally joined the Bank of America Management Program in 1963. He retired as Regional Vice President of Private Banking in South Orange County, California in 1992. He was a graduate of the Pacific Coast School of Banking of the University of Washington. From beginning to end, he genuinely gave his profession his best.

He passionately pursued his interests in gardening, international finance, sports and love of his family. He tended his lawn and garden up until the last year of his life. It has been said that nobody could mow his lawn or tend to his flower beds, other than him. He loved skiing, Angels baseball and golf. His golf ‘buddies’ were all very good friends ad he enjoyed their companionship as well as the competition. Playing golf with his friends was the highlight of his week.

He was preceded in death by his brother, Howard Nielsen. He is survived by Howard’s wife, Marion Nielsen of Galt, California; his brother Frank Nielsen and sister-in-law Paula Nielsen of Tullahoma, Tennessee; and his sister Eleanor Freitag of Beloit, Wisconsin. He is also survived by his children, Leslie Nielsen and Lori Maxfield; his son-in-law John Maxfield, as well as five grandchildren; Leslie’s children are Scott, Kelly and Mason. Lori’s children are Jake and Ella. Wally loved his entire family very much. Most importantly, he is survived by his loving wife of 48 years, Arleen. He will always be remembered as a good friend, father, grandfather and most importantly loving husband of Arleen.

There will be three gatherings for Wally as follows:

A celebration of his life will be held on September 4, 2012 at 1 PM. O’Connor Mortuary, 25301 Alicia Pkwy., Laguna Hills, California 92653. A reception for all will be held immediately after.