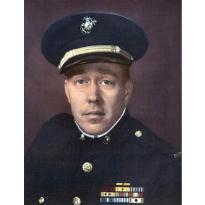 Huber, Walter Lee Sr. entered this life February 4, 1918 and began eternal life on September 22, 2009 at age 91. He was a resident of Mission Viejo for over 40 years. A member of the ‘Greatest Generation’, Walt was born and raised in Louisville, Kentucky. He attended Male High School and enlisted in the United States Marine Corps at 17 where he proudly served his country with distinction as a Marine Corps Officer during WWII and Korea. In 1944, he fought in the Battle of Peleliu under the command of Lt. Gen. Louis B. Chesty Puller and was Aerial Photographic Section Lead during the Okinawa campaign. Walt had a vibrant full life with 34 proud years in military service and a love of aviation. Retiring to civilian life, Walt owned Southwest Aerial Surveys and was a flight instructor at El Toro Marine Aero Club until he hung up his flight suit at the age of 80. He was a member of the OX5 Club, Association of Naval Aviation, AOPA, plank owner of the Naval Aviation Museum at NAS Pensacola, a military author and an avid reader of military history and biographies.

His family sends heartfelt appreciation to Dr. William Nelson, Diane and the caring staff of 1 East at Saddleback Hospital. All friends and family are welcome to celebrate Walt’s life on Friday, October 2 at 4pm in the Chapel at O’Connor Mortuary, 25301 Alicia Parkway, Laguna Hills. Military internment will follow at Arlington National Cemetery. He will always remain in our hearts. In lieu of flowers, please direct donations to The Marine Corps Heritage Foundation at 3800 Fettler Park Dr. #104, Dumfries, VA 22025. Please remember to support your local Blood Bank.