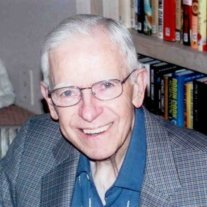 Walt was predeceased by his wife, Nancy, who died in 2004. He is survived by his son David and wife Darlene; his daughter Carol and partner Cathy; two grandchildren, Katie and Christopher; six step grandchildren, Sammy, Chelsea, Marian, Sara, Angela and John; and eight step great grandchildren.

Walt was born in 1928, in Philadelphia, Pennsylvania, to Clarence and Kathryn Diem. He was the middle of three brothers, all 6 years apart in age, falling between Albert the oldest and George the youngest.

Walt excelled in school, and participated in many activities, including school plays. His early aspiration was to become a minister, and he spent his first year in college working toward that goal. He then joined the Navy and found a passion and talent in electronics. While in the Navy, he met and married Nancy Elizabeth Abbot in 1951.

Following his time in the Navy, Walt enrolled at UC Berkeley and received a degree in electronic engineering, graduating with honors in 1956. He soon found a place in aerospace electrical engineering. He was involved with many unmanned space programs at the Jet Propulsion Laboratory, where he retired in 1994 after 30 years of service. Walt also spent many years as a volunteer assisting with communications for the Pasadena Rose Parade.

After his wife’s death, he moved to the Wellington in Laguna Hills in 2007. There he made many friends and is best known for his hallway full of year-round seasonal decorations and fun. In Laguna Hills, Walt’s religious interests again came to the forefront, and he re-committed his life to Jesus Christ when he was re-baptized last year at Saddleback Church.

Walt touched many lives with is kindness, humor, instruction and wisdom. He will be deeply missed.

Graveside service will be held with family only at El Toro Memorial Park at 10AM, March 19, 2013.

A celebration of his life for family and friends will be held at the Wellington in Laguna Hills, California at 2PM, March 19, 2013.

To view more photos of Walt and the video of the service visit:
http://www.lifetomotion.com/login/diem4743/movie/movie.html