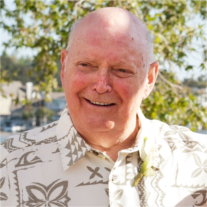 Walt was born in Columbus, Ohio on January 22, 1931 to Walter Charles Feistel, Sr. and Gladys Margaret Deneye. He is survived by his sister Millie Dangler and preceded into the Lord’s hands by younger sister Darlene Cronjager. Walt spent his early childhood in Michigan before his family moved to California in 1939. Walt attended Canoga Park High School and, following service in the Navy, went on to graduate from UCLA in 1957 with a Bachelors of Science degree in business administration.

Walt married his lasting love, Clare Bianchi, on January 28, 1956. Walt and Clare enjoyed a loving marriage and blessed family together until Clare’s passing December 9, 2010. They are survived by their children Chris, Steve, Darlene and Kim, as well as, eight grandchildren and seven great grandchildren. Part of Walt’s legacy involves the many pastimes he enjoyed throughout his life which his grandchildren also embrace; Brandon & Chris – fishing, David – crossword puzzles and reading, Jenna – hairstylist, John – technology , and Thomas – woodworking.

Walt was a dedicated father and grandfather. His life long focus was caring for his family and loved ones. He dedicated his life to Jesus Christ by serving others as a caring father, loving grandfather, loyal friend, gentlemen and all around charmer to everyone he met.

Walt worked in the telecommunications industry for over 40 years, much of it with AT&T. Following the split-up of AT&T he continued his career with Pacific Bell, Pacific Telesis, Air Touch and Verizon.

His children are thankful for his reassuring presence throughout their lives that bestowed them with his devoted love, a providing father and most appreciatively in our later years, a special friend.

God bless Walt and Clare as they reunite in their everlasting love.

In lieu of flowers, his family prefers that you please honor Walt, if you would like, with a gift in his name to the American Cancer Society, https://donate.cancer.org/index.