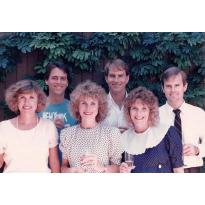 Walt was a nationally recognized expert in the seismic design of building and structures.  In 1964 he lead a team of experts to Anchorage, Alaska to investigate the devastation caused by the great Alaskan earthquake of that year.  The lessons learned from this trip were developed into code requirements by Walt and his team and are contained in today’s modern building codes.

Walt married Margaret Holcomb on August 21, 1943.  They have six children, three girls and three boys. They lived in San Marino, California for many years before retiring to Dana Point, California in 1980.

As longtime members of Saint Edward the Confessor Catholic Church, Margaret and Walt have been active in various ministries at the church.  Walt was especially instrumental in the construction of the new church, working very closely with Father Knight.

Walt’s favorite pastimes included playing bridge, tennis and golf.  During their retirement he and Margaret enjoyed traveling, often with friends, to many places around the world. Hawaii was one of his favorite places and his last trip was there with family in 2004.