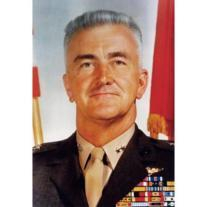 Major General William R. Quinn retired from active duty on September 1, 1975. He was born on June 13, 1923, in Merrick, NY. He received his B. S. degree from the University of Maryland in 1960, and his M. S. degree from George Washington University in 1965. He also completed the Advanced Management Program (AMP63) at Harvard.

His initial entry into the service was as a Naval Aviation Cadet in September 1942. Upon completion of flight training at the Naval Air Station, Pensacola, FL, he was commissioned a second lieutenant in the Marine Corps Reserve, and designated a Naval aviator in March 1944. After serving briefly with the 9th Marine Aircraft Wing, Cherry Point, NC, he reported to Marine Fighter Squadron 312, Marine Aircraft Group 33, on Okinawa flying the new twin engine fighter, the F7F.

Returning to the United States in early 1946, he reverted to inactive status in March of that year, but flew with the Reserves from the Naval Air Station, New York, until October when he was promoted to first lieutenant and augmented into the regular Marine Corps.

Upon graduation from the Aviation Electronics Officer School, Memphis, TN, in August 1950, he reported to Marine Corps Air Station, El Toro, where he served as a ground control intercept controller until February 1951. He was promoted to captain in January 1951.

He next deployed with Marine Helicopter Transport Squadron 161 to Korea serving as a squadron pilot and Aviation and Electronics Officer and subsequently as Personnel Officer of Marine Helicopter Medium Squadron 361 at Marine Corps Air Facility Santa Ana, CA. From early 1953 until October 1955 he severed at the Marine Corps Air Stations El Toro, Kaneohe Bay, Hawaii, and Naval Air Station Atsugi Japan, flying F9F’s and FJ2’s. During this time he was promoted to major December 1954.

In January of 1956, after completing the Aviation Safety Course at the University of Southern California, he reported to the Marine Corps Air Station, Quantico, VA, where he first flew Corsairs with the Demonstration Unit and served as Aviation Electronics Officer with Aviation Electronic Squadron 12. Being reassigned to Headquarters Squadron, he served as the Station’s Aviation Safety Officer and Assistant S-3, prior to his attending the Amphibious Warfare School, Marine Corps Schools Quantico, which he completed in June 1959.

After graduation from the University of Maryland under the Boot Strap program in June 1960, he was assigned to the Marine Aviation Detachment, Naval Missile Center Point Mugu, CA, as Head of Space Vehicle and Satellite Branch, Pacific Missile Operations where he was involved in Project Mercury (John Glenn’s Space Orbits). He was promoted to lieutenant colonel in March 1962.

Assigned overseas in June 1962, he served as Executive officer of the Research and Development Field Unit, Advance Research Projects Agency Bangkok, Thailand, and as the Air Mobility Projects Officer for counterinsurgency (COIN) traveling to Vietnam, Indonesia, Malaya and Burma on various projects.

Upon his return to the United States in August 1964, he completed the Air War College, Maxwell Air Force Base, AL, before returning overseas in August 1965, to serve with the 1st Marine Aircraft Wing in Vietnam. He was attached to Marine Wing Headquarters serving as Wing Operations Officer in G-3, and later as Commanding Officer of Marine Helicopter Medium Squadron 161, Marine Aircraft Group 16, operating from Phu Bai by the city of Hue.

He returned to the 2nd Marine Aircraft Wing, Cherry Point, and served as Assistant Chief of Staff, G-l, from September 1966 until June 1968, when he became Commanding Officer, Marine Aircraft Group 26, Marine Corps Air Station (Helicopter), New River, N C. While stationed at Cherry Point, he was promoted to colonel in June 1967. Returning to the Far East in June 1969, he served as Commanding officer, Marine Corps Air Station, Iwakuni, Japan. Following his advancement to the rank of Brigadier General, August 31, 1970, he assumed duty as Assistant Wing Commander, 1st Marine Aircraft Wing in the Republic of Vietnam. Upon establishment of the brigade in Vietnam, he returned the 1st MAW Flag to its headquarters at Iwakuni, Japan in 1971.

In October 1971, after his return to the United States, he was assigned duty as Director, Systems Support Group, Headquarters Marine Corps, serving in that billet until April 1973, when he was transferred to El Toro and became Commander, Marine Corps Air Bases, Western Area and Commanding General, Marine Corps Air Station, El Toro. Following his advancement to major general on May 3, 1974, he was assigned as Commanding General, 3d Marine Aircraft Wing, El Toro, and CG, I MAF, remaining in that billet until his retirement on September 1, 1975. He was employed by ITT for the next 4 years plus several other consulting roles.