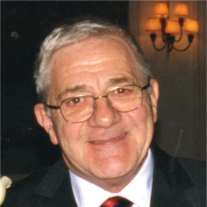 He was a photographer, innovator, outdoorsman, mechanic, craftsman, philosopher, chef and artist–and a devoted husband to Grace, his wife of 52 years.

He was born on June 15, 1936 in Buenos Aires, Argentina, the second child of Luis and Herminia Robertazzi. With his father and his brother, Vicente, they built the home that they eventually lived in.

With his father, he opened a shop that built and sold transistor radios. He earned a degree in optics and served a year on the police force. He also learned photography from one of Argentina’s most prominent photographers.

In 1972, he moved with his wife and two children to Southern California, where he taught himself English, became a U.S. citizen and worked at several commercial photo studios in the Hollywood area as a lab technician, mastering Photoshop techniques before Photoshop even existed.

He enjoyed barbecuing, and he hosted an open house on Sundays for friends and neighbors to enjoy his cooking.

After retiring in 2002, one of his favorite pastimes was building ornate clocks with stands made out of old bricks and marble. He gave most of them away to friends and acquaintances.

Despite suffering a debilitating stroke in 2003, he continued to stay as active as possible, taking up painting as a hobby, and living by his personal credo, “Give and teach.”

He is survived by his wife, Grace; a son, Alan, who is an editor at The New York Times; and a daughter, Veronica, who is a Senior Director of Human Resources.