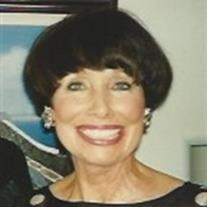 She was born on September 13, 1933 in Grove City, Pennsylvania to the late Dr. Burr McKone Rogers, Sr. and Marjorie Anetta Smith of New Castle, Pennsylvania. Virginia graduated from New Castle High School and Allegheny College in Meadville, Pennsylvania. She achieved her Masters in Early Childhood Education from Manhattanville College in New York State. She married her Allegheny College classmate David A. Reed of Butler, Pennsylvania in Nellingen, Germany in 1956 while David was serving in the U.S. Army. They celebrated their 58th wedding anniversary December 1, 2014.

After college, Virginia was a United Airlines flight attendant, a dedicated Elementary School teacher and Director of a Nursery School for many years. She was a homemaker, mother to four girls, grandmother to six boys and three girls. She volunteered for over 20 years at the Ocean Institute of Dana Point and was a member of the Daughters of the American Revolution, Hollywood and San Clemente chapters, and the St. Andrews Episcopal Church in Irvine, California. She loved boating and she and David belonged to the Dana West Yacht Club and the Catalina Island Yacht Club.

In lieu of flowers, the family is requesting donations be made in the name of Virginia Reed to the Ocean Institute of Dana Point, 24200 Dana Point Harbor Drive, Dana Point, CA 92629-2723, http://www.ocean-institute.org.

A celebration of life will be held in her honor at a future date.