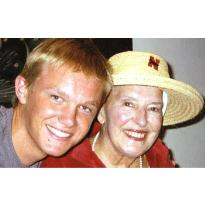 Dinnie White of Laguna Beach, one of the most beloved members of her community, mother of eight, grandmother to twenty, great-grandmother to 15, died peacefully at the age of 81 on September 21, after a heroic one-year battle with cancer. Surrounded at home by several of her children, Dinnie died as she had lived: enveloped by the love and care which she gave so selflessly and constantly to everyone she knew. She was born April 12, 1924 in Sioux Falls, S.D. to Claude and Naomi Newman. The family then relocated to Lincoln, Nebraska where she and her five siblings, Roddy, Jane, Dort, John and Mark grew up and went to school. Dinnie graduated from Lincoln High and attended the University of Nebraska. She married Gerald Booth White, who preceded her in death, in 1945 after he returned from the Pacific where he served as a Marine Corps fighter pilot during the war. After Jerry graduated from the University of Notre Dame with a degree in aeronautical engineering, the family moved several times as it grew. In 1962  Dinnie, Jerry and the family settled in Laguna Beach. In 1969, Dinnie, while continuing to raise her family, went to work for a group of local doctors as their office manager. She remained in that position until she learned she had cancer in 2004. A member of St. Catherine’s Catholic Church, she played an active role in parish activities and functions. She was an extraordinary mother, wife, grandmother, great-grandmother, homemaker, and friend. Dinnie enjoyed life to the fullest at every opportunity. She brought unbounded joy to the hearts of those in her presence and in any environment she fashioned. Her home was always open to all.  She is survived by loving daughters Nannette and her children; Amy Jo and her husband Lance; Carole and her husband John and their children, as well as sons Jimmy and his wife Lauren and daughter; Dusty and his wife Debbie and children, Tom and his son, Robert and his wife Carolyn and children; Billy and his wife Kathy.  She will be dearly missed by her adoring family and friends. ‘Our mother was one of the most selfless and giving people this world has ever seen, and we know she is receiving her reward in Heaven. She will be missed endlessly, and her legacy will be the love and generosity her family continues to extend to the world’, her son, Jimmy said.

In lieu of flowers, contributions may be made to the American Cancer Society.