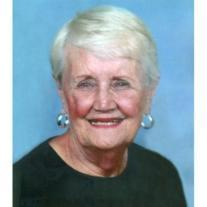 Virginia was born in Milwaukee, Wisconsin to the late Annette and Edward Murphy. She passed away peacefully at the age of 88 on Friday, April 27, at the Manor at Santa Teresita located in Duarte, California, where she had been living in the loving care of the Carmelite Sisters.

Virginia married William Fleming on May 4, 1946 in Milwaukee when Bill returned home following World War II. Bill served his country as a fighter pilot during the Allied campaign in Europe. They were happily married for 25 years until Bill’s health deteriorated from kidney disease. He died in 1971 at the very young age of 51.

Virginia moved to Southern California in 1978. She was an active member of the various Catholic parishes she attended in both Wisconsin and California and loved to play golf. She not only worked in her home raising four wonderful children, she also worked outside the home for most of her life. She retired after a long career in retail sales at the age of 84 in 2007.

Virginia is survived by her 4 children: Kathy Fritz, Timothy, Kevin and Mary Kosinski; 7 grandchildren: Amy, Jennifer, William, Mary, Erin, Jessica and Joseph; 5 great-grandchildren: Hannah, Jack, Drew, Bella and the fifth will have a ‘birth-day’ in four months; and Virginia’s sister, Doris Kirby. She is also survived by many nieces, nephews and friends. In addition to her parents and her husband, Bill, she was preceded in death by her brother, Jack Murphy, and sister, Marilyn Gardetto.

There will be a Rosary Service at the Norbertine’s St. Michael’s Abbey in Silverado Canyon, California, on Friday, May 4 at 6:30 P.M. The Funeral Mass will be at 10:00 A.M. the next morning, also celebrated at the Abbey. Virginia will be buried with her husband, Bill, at the VA Cemetery in Milwaukee, Wisconsin at a later date, where he was laid to rest in 1971.

In lieu of flowers or other memorial gifts, the family asks that memorial donations be sent to St. Michael’s Abbey, 19292 El Toro Rd, Silverado, CA 92676 in remembrance of Virginia.