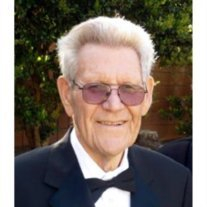 He was married to Barbara Lee Ward who deceased in January 2000. He is survived by his second wife Elizabeth Gilliland, sons Larny and wife Becky of San Diego, Tony of West Los Angeles, Jonathon of San Diego, Kenny and wife Dione of Yorba Linda, daughter Melissa of Mission Viejo, and Theresa and Dan Stanbury of Torrance. Virgil had seven grandchildren; Larny’s sons Ryan, Rory, Brennan, and Kenny’s children Kasey, Ryan, Keegan, and Codey.

He was married to Elizabeth Gilliland on May 4, 2001 in Saint Nicholas Catholic Church in Laguna Woods, CA.

Virgil graduated from Orford High School in Orford, New Hampshire. He served in WWII for three years in the European Theatre of Operations as a sergeant. After the war he attended the Brooks Institute in Santa Barbara and studied photography. Through the years he worked at Paul Parry Studios on Sunset Blvd., Menasco Mfg. Co. in Burbank, and Sargent Industries in El Segundo. Recognizing the need for an Industrial hardware store, he opened his own in El Segundo. All of his children worked at the store from time to time where they learned about dealing with customers, pricing, inventory, and balancing the books.

During his years in Leisure World (Laguna Woods) he was on the Security staff, was a past President of Lion’s Club, was a member of the Garden Club, the Chicago Club, and the Cribbage Club.