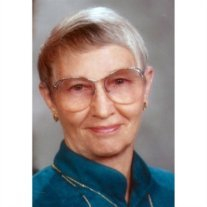 Violet Elizabeth Oliver Dennis, a long-time Lompoc resident, died June 8, 2013 from complications after a stroke in Mission Viejo, California. She was 94.

With a loving and upbeat personality, Vi, as she was affectionately called, made friends wherever she went. Her ever-ready smile and infectious laughter put everyone at ease, endearing her to them.

Born in Metropolis, Illinois on March 1, 1919, she was the middle child and only daughter of Loren and Birdie Robbins Oliver. She married her high school sweetheart, Arthur M. Dennis, in June 1942. As a U.S. Air Force officer’s wife, she accompanied him on each transfer. From Metropolis to Belleville, Missouri; Biloxi, Mississippi; Wichita Falls, Texas; and then finally to Lompoc in 1965, she created a loving, nurturing and beautiful home environment for her husband and son, Brian, no matter where they lived. After her husband’s retirement from the Air Force, they resided briefly in Delta, Colorado before returning to Lompoc.

During their 40 years in Lompoc, Vi and Art were devoted members of the First Christian Church, where he worked as a lay minister and she performed duties as a church elder.

The couple enjoyed their retirement years, traveling with friends and family members across the United States and Europe. Married for 58 years, theirs was a long and beautiful love story.

After her husband’s death in 2000, she lived in independent and assisted-living facilities in the Los Angeles and Orange County areas.

She is survived by her son, Brian Dennis and his wife, Janis, of Cypress, California, and grandson Brandon Dennis as well as many nieces and nephews.

Graveside services will be held in October in Metropolis.