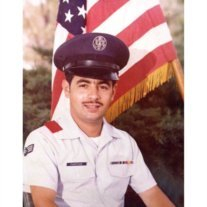 Vincent was born January 25, 1950, in the Bronx New York, son of the late Rita and Warren Farfone. Vincent was 1 of 4 siblings. While stationed in England, he met and married Lillian.

He attended Christopher Columbus High School in New York. Right after high school he enlisted in the Air Force to serve his country. He was stationed in England, Plattsburg New York, and Germany. He was a cook for the Air Force and worked on special assignments.

Vincent relocated his family to California in 1987 to be near family and to enjoy the warm weather. Cooking was his passion, he started a catering business and would occasionally cater events for family and friends. He enjoyed family gatherings and made the BEST antipasti, he was also a BIG New York Giants fan, and enjoyed going to drag races.

Vincent was preceded in death by his mother, father and twin brother, Rita, Warren and Daniel. He is survived by his children Vincent Jr., and Melissa, his 3 grandchildren, Kayla, Emily and Anthony, his ex-wife Lillian, and his siblings Jane and Carol.