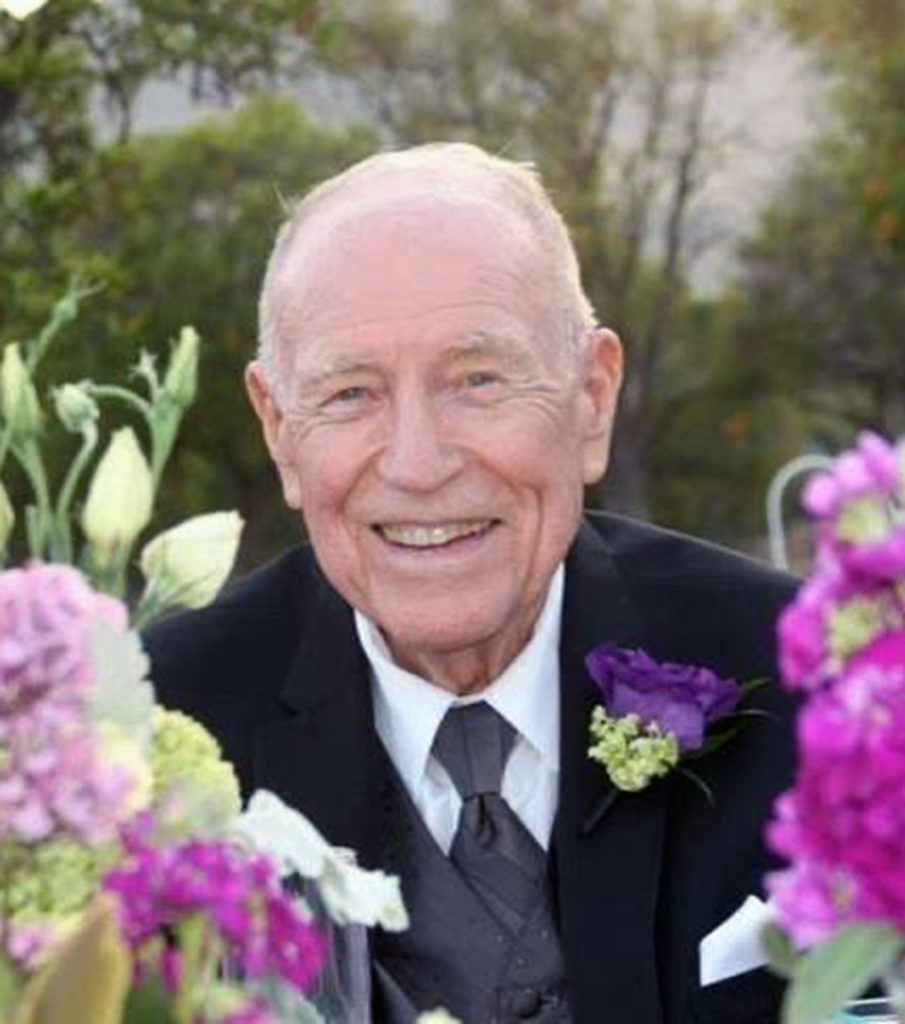 Verl Dean Nash passed away on May 27, 2020 at Mission Hospital.  Verl is survived by his beloved wife Sue, his daughter Karla Tabor, her husband Cliff and two grandsons Andrew and James Tabor.  He is also survived by his daughter-in-law Donna Nash; granddaughter Jill Iverson and great grand-daughter Stella; grandson Steve Nash and wife Kristi and great-grandson Hayden.  He is predeceased by his son David, brother Jack and parents Pearl and George Nash.

Verl grew up in Cheyenne, Wyoming where he attended grade school through high school.  He was an avid basketball player and his team won the State Title two years in a row.  This success led to a basketball scholarship to Colorado State University in Fort Collins, Colorado.  Verl played basketball and was a member of the Sigma Alpha Epsilon Fraternity while earning his Bachelor’s Degree in Physical Education and graduating in 1952. He later earned a Masters degree in Physical Education from the University of Northern Colorado.

On May 30, 1952 he married Suzanne Davis, the love of his life.  Their love endured a fun-filled 67 years and 362 days.  When asked if they could remember a time when they were not married, they simultaneously and emphatically responded “No!”

Verl enjoyed a successful teaching and coaching career in and around Colorado and Wyoming for fourteen years before moving his family to California.  His son David was born in Greeley, Colorado  and daughter Karla in Cheyenne, Wyoming.

The family moved to Shafter, California in 1966.  At Shafter High School, Verl began his tenure as the freshman team basketball coach and taught history.  Over the years, coaching basketball was phased out and in the class room he became skilled in teaching social studies, driver’s education and math.  The last few years he added Principal of the Adult School Education to his evenings.

In addition to educational responsibilities, Verl was very involved in the community.  He was a member of the Congregational Church where he sang in the choir.  His singing skills led to acting in Community Theatre.  He was on the City Council for ten years and was a member of the Lions Club where he served as President for a year.  Friday nights in the fall you could find Verl in the announcer’s booth at the Shafter High School Football games where he was the “Voice of the Generals” for 29 years.  Always by his side in the booth with her binoculars was his spotter Sue.  They made a great team though Sue wasn’t always in favor of being called Spot.

In 1994 he retired from education and began selling retirement plans within the school system for a financial group in Bakersfield.  In addition to this he became heavily involved in genealogy and researched his family roots back to the Mayflower.

A turning point in his life came in 2001 when he had open heart surgery.  Once he had recovered, he and Sue moved to Mission Viejo, California. He and Sue became members of the Presbyterian Church of the Master, where he again sang in the choir and they both became members of a small group bible study.  He joined the Rotary Club and became a member of SOX (a genealogy research club.)

In addition to his usual community involvement he began a 19-year volunteer career in hospitals.  The first group was Mended Hearts, a support group visiting pre and post open-heart surgical patients. His loving daughter-in-law Donna, a cardiac nurse got him involved.  This very successful program allowed him, as an open-heart patient, to round as a volunteer interacting and confidently saying “I know how you feel” with patients recovering from surgery. He was the person these patients could ask questions of because he had “been there”. This would bring them hope that they would survive the surgery and could recover to be “like Verl” up and about again. He loved interacting with the recovering patients.

The last ten years volunteering were spent at Mission Hospital.  He had his own cart and delivered newspapers and trash bags.  But mostly he delivered a welcome break to the weary scared patient who thought everyone in a uniform was there to poke them or give them a pill.  He always said his opening line was “I’m one of the good guys.  I’m not going to poke you or take your temperature.”  He said his day was complete if he got a smile. He was a favorite of the almost 400 volunteers at Mission Hospital.

Verl was an all around great man who loved his family and his community.  His faith is what guided his life and worship was a part of his daily life.  He will be missed by all who had the privilege of knowing him.

In lieu of flowers the family requests donations be made to Mended Hearts.
https://linkprotect.cudasvc.com/url?a=https%3a%2f%2fMendedhearts.org&c=E,1,74waw2JsZGTNChBUf96feoZndYZn8wSr3Cxf-0O94zaN236JDYMNrQsBk0ancvzBcBOInOdN1ohdNdpl79UDQkxdLIJnF0-1DaOGQyni5v_9bno8&typo=1
Select donation tab from menu
Select National Organization from drop down box
In comment section type Chapter 216
Under recipient section click and enter Verl Nash
Acknowledgement will be auto filled by Mended Hearts