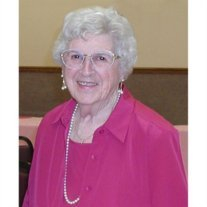 Verabelle Chamberlain Stratford, 99, passed away Nov. 29 at her Laguna Woods home. A memorial service will be held Dec. 11 at 2 p.m. at Geneva Presbyterian Church in Laguna Woods, where she was an active member for over 40 years.

Verabelle was born in Los Angeles March 2, 1914 and lived in Southern California all of her life.

After graduation from high school, she took secretarial classes and worked as a secretary for an attorney, then a CPA, and finally for the Department of Water and Power of Los Angeles. She became an executive assistant and stayed with the water and power company until she married Paul Stratford in 1957. She resigned to become a full-time homemaker.

The couple moved from Arcadia to what was then Leisure World Laguna Woods in 1972, and Verabelle became involved in a number of activities, including Aliso Club, Laguna Woods Art Association, Ebell Club and the Camera Club of Laguna Hills. She was a patron for Pageant of the Masters and attended the program yearly for decades. She also swam, golfed and took painting lessons.

Verabelle and Paul traveled extensively after he retired. She participated in Laguna Woods senior travel activities and travelogs.

Although Verabelle and Paul had no children, they were involved in the lives of their nieces and nephews. Verabelle is survived by them: Sally Hightower, Diana Skaggs, Terri Hatch, Bill Overhulser, Gordon Myers, Bill Myers, their spouses, children and grandchildren.

As a member of Geneva Presbyterian Church, Verabelle was involved in women’s circle and multiple Bible study groups over the years, as well as serving as an ordained deacon. In lieu of flowers, contributions may be made in her name to the Deacon Fund at Geneva Presbyterian, 24301 El Toro Road, Laguna Hills, CA 92637. Phone 99-837-2323