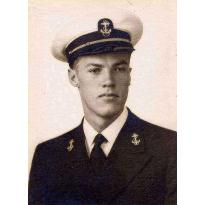 VAUGHN DEL BRINK, 83, was born June 12, 1923 in Nebraska and died December 27, 2006 in Las Vegas, Nevada. A graduate of USC and a Navy veteran who served his country in WWII, Del was a Management Consultant whose profession took him to New York and then to Chicago; to Kansas and then to Wisconsin. He remained active in his career until he was 80 years old. Del was an avid golfer and world traveler. An excellent chef, he referred to himself as ?Wolfgang? as did his family. One of his favorite sayings to his children was ?I’m not the cornucopia of life.? Del was very proud of his Viking heritage. He enjoyed time spent with family and loved to travel to spend time with each of his children. He is survived by his sons, Curt, Steve and Jeff; his daughter, Chris; his fiancé, Gloria; 9 grandchildren and 2 great-grandchildren. Del was preceded in death by his beloved wife of 47 years, Lois, whom he met in high school and later married. Del will be remembered as a man ?who always cared? and will be greatly missed.