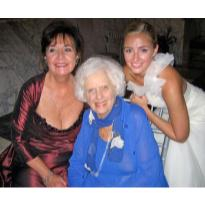 Ursula Naomi Diemert was a gift to the world and all of us that shared her life. She was born in Vancouver BC, Canada in 1922. Her mother Eva May and father James D’Ersby were blessed with her birth on August 19th. She was the oldest of 5 daughters. Her roots and foundation had a mix of Canadian and English traditions. They lived right up from the water and a short walk you were on the beach overlooking the skyline and ships coming into Vancouver. She had many relatives nearby and family gatherings were a common celebration.

Her father who traveled between America and Canada developing his business and was killed just outside of San Francisco when she was 10. That put a lot of pressure on her and her mother to make sure her younger sisters would be able to get an education and taken care of. They made it ok for a while and at a very young age Ursula went to work to help support the family. She was committed to providing for others and putting her needs aside.

With the war on and traveling south to Seattle she met Bill Diemert, a young Marine just back from 3+ years as a prisoner of war. From there the sparks much have flied and soon they were going home to meet her mother and sisters. It must of worked. So soon she became a Marines wife. Watching him leave and living all over the US taught her to be resilient and adapt to many challenges. Also Bill would be away with the troops and she would be home having and raising babies. She found support with other wives and learned to live on and off the base.

With Adele and Debi both born in Seattle and growing up in the Pacific Northwest, to their luck Bill got station in Hawaii. The Canadian girl that grew up around water was finally in a new place that offer what she loved. Beautiful warm beaches, great new friends and a lifestyle that let her use her sewing machine to make clothes for everyone. Bill Jr. was born in the Army hospital there and the night getting over the Pali made for a good story. I know she said many of a prayer hopping Bill would make it in time.

From there it was on the Florida and a few places in between. Always first going back to Canada to see her Mother and sisters. Bill’s brother Father Jerry was always stopping by with chocolates and a bottle of something to settle the nerves. He was a Jesuit priest and always gave his blessing to one and all. Ursula filed and studied hard and was very proud to become an American citizen.

California was next on there base transfers and it was there they made major roots. El Toro base transitioned to Lowell Street in Santa Ana. With a strong tie to the Catholic Church and kids in school Ursula worked downtown Santa Ana at JC Penny’s and later close to the house at the Fashion Barn. She loved clothes and was excellent at finding the right thing for all her special clients and friends. The local taverns in those days were the way everyone use to connect, many for the Marine Corp, husbands and wives. It gave a chance to raise their kids and see them go off and get married and start their own life’s.

From there it was Mission Viejo, the Palmia. It was a resort with a beautiful community center and nice big pool that she loved. She loved to just get in and walk in it connecting with new and old friends. Then it would be home in time to have friends over for appetizers and drinks. Her Bill passed in 1997 and they had been together for over 50+ years. Those years were tough but she transitioned to give her attention to her children and grandchildren, Justin, Erin, Jordan, Patrick, Matthew, Sean and Christopher, were all her shinning stars. She would have them over and cook some great homemade meals or barbeque. She was a great cook.

As year passed she remained in her house up until the very end and those friends that stopped by were amazed by her memory and awareness to everything going on. Her weekly calls to her little sister in Oregon, Donna was a blessing that kept her so excited as they would talk about growing up and how special their mother was. Good friends like George Robinson would bring back great memories of his visits with Edna and him coming down multiple times in the year. Dorian stopping by and watching her grow into a beautiful women and mother, Marta and Marvis stopping by to share a glass of wine, Midge who help her physically and was there for any simple thing, Pat who came on as nurse but ended up a great friend, Kay and Ken next door and always there, Cynthia that moved into her mom’s house after she passed and couldn’t do enough and always with a kind word, Peggy and the old group form Santa Ana days, Elinore an Irish angel who they shared each other life’s for well over 40 years, Chuck and Ceil who passed away but played a special part in her life, the list goes on and on. Ursula was someone you loved being in her company and always felt warm and special being in her world.

Her kids, grandchildren and great grandchild along with her nieces and nephews that knew her would tell how special they felt and how they looked forward to catching up with her. That will be the part that we will all miss. Daily, weekly, monthly updates on what everyone was doing and how amazing tomorrow will be. Ursula’s spirit and fortitude was so strong and even in the tough times she could find hope and promise in tomorrow. That is the Ursy we want to remember and know how proud she was of those she loved so much and how much she love them all. If you ask anyone at any part of her life what Ursula was like, Caring, Loving and a Big Heart would be just a few of the qualities that would be told. She at all times of her life faced so many challenges and struggles but her spirit remained so strong. Ursula taught us many things and I know the greatest was to love what you have and always tell those close how much you love them. Life is short and everyday is a gift. She lived her life that way and everyone felt it.

To all family and friends please know how you impacted her life and she is truly grateful for all of you being apart of it. You in your special way gave her millions of treasures that now give her peace and I know she carries you all still with her.

Celebrate it all and God Bless.